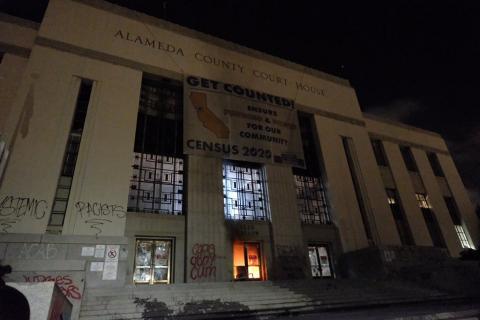 Revolutionary Activity Ignites across the U.S.

On Saturday, July 25th, 2020, revolutionaries gathered in cities across the country in response to the deployment of unmarked vans filled with ICE and other fascist personnel to Portland, OR, snatching comrades off of the streets in recent weeks; as well as plans to send these thugs to other cities in the weeks to come. Meanwhile, the murder of black people by police and right-wing civilians continues unabated.

Precincts were attacked, State vehicles burned throughout the night, and countless federal buildings were smashed.

Here is a brief rundown of some of the events that transpired in the U.S. on July 25:

AURORA, CO: Revolutionaries took over an interstate highway and lit a courthouse on fire.

AUSTIN, TEXAS: A protestor was murdered by a fascist.

BALTIMORE, MD: A Baltimore Fraternal Order of Police building was attacked by revolutionaries. Its building was defaced and its American flag was burned.

LOUISVILLE, KY: More than 300 members of the Atlanta-based Black militia NFAC, or “Not F**king Around Coalition” came to Louisville demanding justice for 26-year-old Breonna Taylor, an ER technician who was fatally shot by pigs in March. Wearing all black and carrying assault rifles, members marched in military-style formation from Baxter Park in the Russell neighborhood to Metro Hall where they stopped around 2:45 p.m. at police barricades.

Right across was a smaller group of 50 far-right “Three Percenter” militia members, who were also heavily armed. These right wing armed vigilantes came to support the pigs.

NEW YORK, NY: At least one NYPD vehicle was smashed and revolutionaries set barricades on fire.

RICHMOND, VA: A garbage truck was set on fire outside police headquarters.

SACRAMENTO, CA: Windows at City Hall were shattered and protest slogans were spray-painted onto the front doors of the Sacramento County Main Jail.

SEATTLE, WA: The site of a youth-detention-center-to-be was set ablaze, along with several construction trailers. A hole was blown into the wall of the Seattle P.D.’s East Precinct building. More here: https://www.amwenglish.com/articles/seattle-revolutionaries-burn-down-a-youth-jail-construction-site/.

Revolutionary anarchists in the U.S. stand in solidarity with these uprisings. The impending collapse of the U.S. empire is long overdue. Abolition has never been so palpably within reach. Alongside revolutionary activities taking place worldwide, in response to fascist regimes and the inherent cruelties of capitalism alike, these events make clear that the people of the world have had enough.

We are ready and willing to take back what’s ours!

New Action Report from the Children of Fire Initiative

Anarchists and the coronavirus