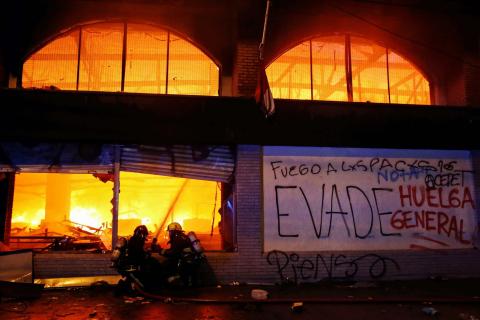 And Why It Matters in the United States

On July 24, the Chilean state raided three homes and arrested two anarchists on bomb-related charges, Monica Caballero and Francisco Solar. Monica and Francisco have spent the last 10 years in and out of prison facing similar charges in Chile and Spain. Their latest arrest is just the newest chapter in a series of intelligence operations against them—but it is also an escalation of the state’s attempts to quell the popular rebellion that rocked Chile from October 18, 2019 until the onset of the COVID-19 pandemic in March 2020.

Throughout the months of rebellion in Chile, the government tried out a variety of different strategies to quell the revolt: martial law, paltry reforms, both lethal and non-lethal crowd dispersal, and targeted prosecutions of alleged looters and arsonists. None of these enabled the state to regain the upper hand—but the onset of COVID-19 did. Today, martial law is back, the graffiti around the Plaza de la Dignidad has been painted over, and although battles with police still break out from time to time, the idealism once seen in the streets has given way to desperation. While the virus did not hinder the spread of the revolt in the USA, that doesn’t mean that the revolt currently unfolding in the US is secure against sudden, unforeseen changes. Recall how the attacks of September 11, 2001 paved the way for the suppression of the anti-globalization movement in the USA, including both mass mobilizations and autonomous direct action.

The case against Monica and Francisco in Chile offers a glimpse into a possible future following the ongoing anti-police revolts. We can be certain that the United States government has paid close attention to the strategies that governments like France, Hong Kong, and Chile have used to quell rebellions within their borders. When a democratic state like Chile succeeds in employing a strategy of repression, that represents a step forward for every other democratic government that also aims to subdue its population.

In the best possible case, the revolt against policing in the United States will grow into a social force that can stop the state from locking anyone away, including our comrades. But until that happens, the task of defending those who aspire to liberation should know no end or national boundary. The state anywhere is a threat to rebellion everywhere.

This is why we support Monica and Francisco.

“Freedom immediately for political prisoners!” A banner from the Coordinadora 18 de Octubre.

The Coordinadora 18 de Octubre, Santiago’s main organ of support for prisoners from the October 18, 2019 rebellion in Chile, released the following statement on the day of their arrests:

From the Coordinadora 18 de Octubre, for the freedom of political prisoners, we express our deepest support and solidarity with our compañerxs Francisco Solar and Mónica Caballero, who were arrested in morning home raids coordinated by the state, carried out by the OS-9 squad of carabineros, and to be prosecuted by Santiago’s Metropolitana Sur state attorney’s office.

We repudiate and will make visible the permanent nature of the political persecution carried out against the defendants for rising up in social struggle as anti-authoritarians. Like many others before them, they are the latest victims of a systematic reprisal that is not limited to the two of them, but rather intends to impact everyone and anyone that, since the beginning of the October 18 revolt, has demonstrated against the apparatus of power and struggled for dignity. It is in that spirit that we worry for the safety and wellbeing of our comrades behind bars.

Despite the incomplete nature of details about their current case, it is important to note that as of today (Friday, July 24) there have been three home raids, while at the same time the state is working to update a new intelligence law.

Last but not least, we uphold our rejection of the bourgeois media’s treatment of this developing story. Once more, as they have done throughout history, the bourgeois media puts itself at the service of the state apparatus, collaborating incisively in the criminalization of protest.

LOVE AND STRENGTH TO MÓNICA AND FRANCISCO

FREEDOM FOR ALL POLITICAL PRISONERS”

The Coordinadora 18 de Octubre’s (@coordinadora18octubre) response to the raids and the arrests of Monica and Francisco.

Monica and Francisco have already been charged in two previous such cases. In 2010, the two were arrested in the notorious Caso Bombas I along with a dozen more defendants. Together, they were accused of placing bombs around Santiago. Although Monica, Francisco, and all of their codefendants were eventually absolved of all charges in 2012, the repression took a grievous toll on the anarchist movement of that era, which had been based around openly squatted social centers.

The following year, Monica and Francisco were arrested in Spain and charged under anti-terrorism legislation for the alleged October 2, 2013 bombing of the Basilica del Pilar Church in Zaragoza. The two were sentenced to twelve years in Spanish Prisons, but after the defense took the case to Spain’s Audiencia Nacional (Spain’s supreme court), their sentence was commuted to deportation. In March 2017, Monica and Francisco returned to Chile.

Whether these charges stick or not, this latest chapter of this story illustrates how the struggle against state violence takes place on a global stage. We see Monica and Francisco alongside the tens of thousands of people who have been arrested in the United States since the murder of George Floyd, and the millions worldwide who are targeted in similar movements.

The Rebellion in Chile

As the Coordinadora 18 de Octubre statement emphasizes, Monica and Francisco’s current case is an escalation in an already months-long campaign of repression against the revolt that rocked Chile starting in 2019. The revolt saw riots against police weekly—and sometimes daily. In the course of months of struggle, the demonstrators refined their protective gear, strategies, tactics, and forms of organization; at times, they overwhelmed and outlasted the police.

Neighborhood and affinity-based assemblies popped up around the city to coordinate people’s basic needs as well as propaganda, popular education, and cultural activities including concerts and theater. Statues memorializing murderous colonizers fell alongside the president’s approval ratings; children adopted protest anthems in place of traditional children’s rhymes. Unions, social organizations, and non-profits called for demonstrations—but they could not control them. The movement was largely decentralized and leaderless.

People on the streets together during the revolt in Chile.

For a more in-depth anarchist appraisal of the revolt, we recommend the analysis by the Kalinov Most collective, “More than Two Months of Revolt against the Chilean State: First Impressions, Instinctive Predictions, and Non-Negotiables”.” The October 18 revolt was too complex and widespread to summarize easily, but it is worth drawing some parallels with what is unfolding in the United States right now.

Like the George Floyd rebellion, the revolt in Chile began in response to the circulation of shocking images of police violence. During the week before the revolt got underway, high-school students in Santiago were demonstrating against a fare hike by storming subway stations and opening the turnstiles, allowing commuters to ride for free. Footage of the police attacking young students went viral, spreading anger at the police throughout Santiago. The ensuing week of martial law left over 20 people dead, further stoking popular anger.

The primera linea in Chile.

Like the George Floyd rebellion in Minneapolis, the revolt in Chile started in one city—Santiago—but soon spread all over the country, generalizing beyond demands around the immediate case that sparked the rebellion. October 18, 2019 saw the burning of multiple metro stations, buses, grocery stores, and the city’s electrical company. Spontaneous, cooperative looting spread throughout the city. There were scenes of looters taking televisions and other brand new luxury items and joyously pitching them into burning barricades. In less than 24 hours, the demonstrations spread to Valparaiso, Concepción, and other major cities. As the rioting spread, the motivations for the revolt expanded from the anti-fare hike campaign to a generalized opposition to the police, the constitution, and the colonial legacy of the nation itself.

In contrast to the George Floyd uprising, the arrival of COVID-19 in Chile quelled the riots—whereas in the United States, the pandemic set the stage for the uprising, as the economic stress of surviving the worst unemployment in decades compounded the fear of an ongoing authoritarian crackdown and the _ the government brazenly abandoned the vast majority of the population to an early death. However, in both Chile and the United States, an interruption in the normal functioning of capitalism opened up time, energy, and anger that fueled the unrest. It is difficult to understate how disruptive the collapse of Santiago’s public transportation was for the functioning of the economy in Chile—not to mention a week of martial law.

An infographic for spreading the autonomous, self-organized neighborhood assemblies during the October 18 rebellion.

On the Front Lines in Chile: Six Accounts from the Uprising

Not Falling for It: How the Uprising in Chile Has Outlasted State Repression

The October 18 revolt in Chile.

Announcing issue #1 of Oak: A Journal Against Civilization