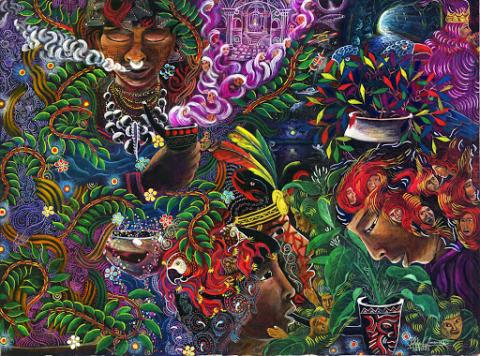 “Whenever man has wanted to make the State his heaven, his hell has been built” – Hölderlin

The present text links three fundamental paths; In the first path, modernity is addressed, which entails the birth of power structures that dominate human beings and nature, crisis is sustained as the established order; in the second, a deep relationship between Anarchy and Nothing-ism inasmuch as they are understood as attentats against established dynamics, dynamics that propitiate the diseases of civilization; lastly, the third proposes a recovery of the aesthetic-poetic in the Environmental Feeling-Thinking as a response to the crises and with a Nothing-ist vocation.

The first path begins with the historical recognition of the power structures that the human being has created to dominate nature, specifically in the historical moment called modernity and which involves major cultural changes. One of the main phenomena is the Industrial Revolution which, according to (Brailovsky, 2004), is the ideology of the seizure of nature. In this sense, the human being goes from feeling nature to legislating over it as soon as he rationalizes it, turns it into an object, dominates it through scientific, productive and financial forces (Duque, 2008).

Additionally, modernity brings with it a process of colonization-modernization against Abya Yala – Latin America, a deep uprooting with identity occurs, a deep uprooting that is expressed, not only with the arrival of Europe, but also with the invention of theories of development. (Escobar, 1996).

Modern culture entails a problem that lies at its core, it cannot subsist without growing, what does not grow cannot be maintained. Capital expansion is not governed by moral rules. The voracity of capital has no limits, but the land does; this voracity is precisely the main cause of the environmental crisis (Angel Maya, 2004).

In occlusion, in broad strokes, this is how the deep environmental crises are sustained, which generate the ways in which the culture – ecosystem interrelate, structures of domination have been created between human beings and against the nature that we are, these structures have become the socially accepted established order; in addition, to the colonization of the territory that we are. It is essential to recover our Savage Hope (Arango, 1974)

In this path, deep relationships emerge that are interconnected, the different positions that found the relationship between Nothing-ism, as a movement against the established order and the necessary anarchy, consistent with the nothing-ist vocation to understand the necessary total absence of structures that govern us, are expressed below.

In the First Nothing-ist Manifesto (Arango, 1958) it is enunciated that “Destroying an order is at least as difficult as creating it,” – they began by clarifying -. Standing before a venture such large proportions, we renounce to destroy the established order. The fundamental aspiration of Nothing-ism is to discredit that order ”. Furthermore, “In this society in which lies are converted into order, there is no one to triumph over but oneself. The mission is not to leave a faith intact, nor an idol in its place. Everything that is consecrated as worthy of worship by the reigning order will be examined and revised”.

Additionally, in a letter written by Gonzalo Arango, he expresses that “happiness will be a chimera as long as man is educated in fear and coercive laws; in the philosophy of having and not being; in the will to dominate and not in the vocation of love. (Escobar, 1980, p.384). In these senses, in the book Black Work, Gonzalo prophesies that,

“The generation that succeeds us or is already working on the political revolution, will find a wrenching of confusion in souls and in the social order, and this critical anarchism that we have formulated will give rise to new values ​​and to a rebirth. This is the invisible but effective contribution of our active nihilism, to the Colombian revolution.” – (Arango, 2016, p. 230)

This is how in disorder, anarchism, a mixture of verses and riot, in the farewell to the rules, “agitation of consciences”, love and free verse, Nothing-ism became the headache of the authorities, the black sheep of the literary movements, the fun of the middle class “who had no shows” (as Amílcar U used to say), and the downfall of Gonzalo Arango who, due to the occurrences of his disciples, ended up excommunicated and imprisoned more than once. (Rodríguez, 2008)

In reality, Nothing-ism was characterized by rebellion and anarchy. The Nothing-ists made extremist decisions, such is the case of their resounding rejection of submission to a consumer and propaganda society; for many of their unilateral decisions, they were constantly persecuted by the State (Saganogo, 2008)

In an interview with Jota Mario Arbeláez he affirms: I believe that anarchy in behavior is what saves, at least the writer; The interviewer replies: So in order to be a poet, you have to be a bit of an anarchist, he replies: No, not just to be a poet, to be a worthy human being. (Arbeláez, 2008)

By that, a deep connection between Anarchy and Nothing-ism is glimpsed in terms of other ways of comprehendig the complexities of the human being; in the recognition of the diseases of our civilization and its indispensable deconstruction.

In the third path, it proposes the emergence of new ways of relating to the land that we are, which goes through an understanding of the necessary equlibrium between the feeling-thinking rooted in the culture-nature relationship and with a Nothing-istic vocation.

The deep aesthetic-poetic relationship with the world can be found since the Ionians, who understand reality not as a metaphysical entelechy, but as a physical, sensitive and caressable object. (Angel Maya, 2002). Quoted in (Ramírez, 2018). Also, in the book Body-Earth, Patricia Noguera meditates on the relationship that is maintained with nature through sensitivity, and how the senses linked to the world of life make the foundation of a sensible thinking with the earth we inhabit (Noguera, 2012)

In addition, feeling-thinking is expressed in texts like those of Arturo Escobar, also inspired by the concept of feelingthought popularized by Orlando Fals Borda (Fals Borda, 1984). To exalt feeling-thinking, it is necessary to resort to the poet and the story “Celebration of the weddings of reason and heart ”(Galeano, 1989)

Furthermore, those who still insist on the path of development and modernity are suicidal, or at least ecocidal, and undoubtedly historically anachronistic. (Escobar, 2016). In understanding that considering that the most sacred of all my duties was to rebel against all oppression, regardless of who was the author or the victim (Lehning, 1978) victim-oppressed, nature-victim.

… To be one with all living things, to turn into a happy forgetfulness of oneself, into the whole of nature (Hölderlin, 2007). Forget the Self-Subject-Reason. Dissolve into the whole of nature. Renounce the power established in the subject as I-think, as I-reason, over the Nature-Object, to accept, understand and comprehend, that we are nature, Body-Earth, and that this radically transforms our ways of inhabiting the Earth. (Ramírez, 2018)

Finally, the great teacher Augusto Ángel Maya affirms that: If life does not flourish in poetry, it is not worth it. Therefore, this paper is a proposal that flourishes from Nothing-ist poetry, of emergence against the crisis established as an order, and in favor of life.

Nothing more anarchist than a flower that grows state-less

Collaborations with stilts [at] riseup.net

Get In the Zone: A Report from the Capitol Hill Autonomous Zone in Seattle

June 11th ; A few notes on this world (for Marius Mason, june 11th, in solidarity)