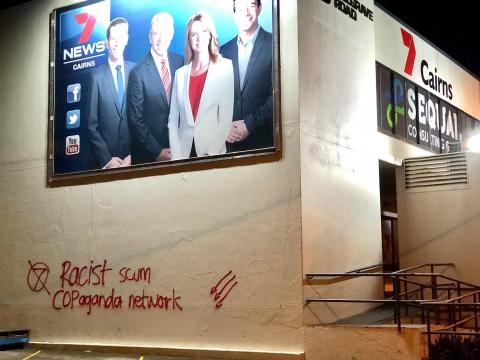 During the night of 03-04 August 2020 we visited the offices of News Corp publication The Cairns Post and the local offices of the Seven Network, broadcaster of 7 News. The Cairns Post is one of several Murdoch-owned News Corp print and online media outlets that dominate the news media landscape in so-called Australia and aggressively promote a far-right, ultra-conservative, anti-Indigenous, anti-refugee, pro-military and pro-law and order agenda. These newspapers are also the home of far-right “commentators” such as Andrew Bolt and Rita Panahi. The Seven Network promotes the same agenda via their news and current affairs programming. We haven’t forgotten the despicable “Inside Reclaim Australia” special aired on 7’s Sunday Night program back in 2015 – a supposed “investigation” that gave far-right activists a platform to present themselves as “concerned parents” and “ordinary Australians” and increase their social media following. Nor have we forgotten the disgusting racist comments by panelists on 7’s breakfast show Sunrise in 2018 during a “hot topics” segment about the Stolen Generations or the fact that Sunrise gave regular airtime to far-right Senator Pauline Hanson, including paid appearances during the lead up to the 2016 Federal Election. The Cairns Post and 7 News are just two local examples of everything that is wrong with the media landscape in so-called Australia – a landscape dominated by a handful of corporations and interconnected family interests resulting in one of the highest media ownership concentrations in the world. These media monopolies have led to a significant percentage of the population being completely brainwashed into acting against their own interests and adopting what are essentially the authoritarian worldviews of corrupt billionaires and their cronies as if they were their own. As antifascists we believe that the struggle against resurgent fascism in this part of the world needs to move beyond obsessively focusing on the activities of fringe far-right “social media personalities” and start actively targeting the structures and institutions embedded within society that provide fertile ground for the normalisation of fascist mentalities. As anarchists we believe that action speaks louder than words. We hope that our action serves as a small contribution towards this goal.

Solidarity with the Black Lives Matter movement both here and around the world.

– some enemies of the settler state A Drink with the Idler: David Graeber