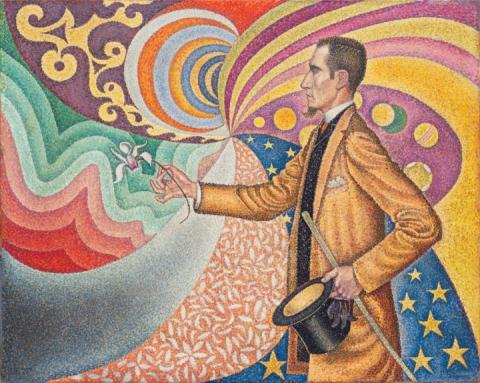 What is the relationship between Félix Fénéon’s politics and the art he admired?

Even now, Benjamin H. D. Buchloh, Harvard’s modernist, is a passionate Marxist. And although the Soviets quickly turned against their modernists, October, once the most influential academic publication dealing with contemporary art, is named after Sergei Eisenstein’s famous 1928 movie about the Bolshevik revolution.

So far as I can see, none of the efforts of Buchloh, Clark, Greenberg, October, or Wollheim (who was my teacher) have had any real political effect. Blunt’s has, but of course his espionage on behalf of the Soviets turned out to be deplorable.

Félix Fénéon (1861–1944) was an activist when young, an anarchist (like many of his artist friends) who later became a communist. He never gave up his leftist convictions. While supporting himself as a clerk for the French War Department, he probably helped with an 1894 bombing in Paris, for which he was tried but not convicted.

Unlike many anarchists, Camille Pissarro for example, he was a proponent of violence. Fénéon was also an important collector who, because he disliked the reactionary taste of the French museums, considered leaving his modernist art to the Soviet people, until the German Soviet pact of 1939.

Some years ago, the rehanging of the Museum of Modern Art’s permanent collection set Paul Signac’s “Portrait of Félix Fénéon” (1890) at the entrance to the galleries devoted to the permanent collection. This was a little surprising, for the larger public likely did not know of either this particular Signac or his subject.

But it was appropriate, for Fénéon played a significant role in establishing the reputations of some of the early French and Italian modernists who are prominent in the museum. An extremely sociable, very private man who had a complicated love life, he knew many of the leading artistic and literary figures in Paris during his long lifetime. Always fantastically discreet, Fénéon was very good at compartmentalizing his life.

Fénéon was close friends with Pissarro, Georges Seurat, and Paul Signac. He played an important role in Parisian art life as editor of La Revue blanche, which published Pierre Bonnard, Felix Vallotton, and Édouard Vuillard. And when working for the art gallery Bernheim-Jeune from 1906 until 1924, he contributed significantly to the very successful commercial career of Henri Matisse. The catalogue for the MoMA exhibition, Félix Fénéon. The Anarchist and the Avant-Garde, quotes the painter and collector Maurice Boudot-Lamotte, who wrote, “Fénéon, as a good anarchist, planted Matisses among the bourgeoisie from the back room at Bernheim- Jeune as he might have planted bombs.”

Fénéon was a marvelously original, extremely self-effacing writer whose Novels in Three Lines, identified as his and gathered in a book only posthumously, are fascinating narratives based on actual events. A translation by Luc Sante from 2007 includes more than a thousand of these laconic stories, some of which, like this, one come out as only two lines long:

Mlle Clara Peyron, 65, had her throat cut in Hyères.
The murder had no other motive than covetousness.

The MoMA exhibition — the first exhibition devoted to Fénéon — was originally scheduled to open with 130 objects on March 22 and run through July 25, 2020. Since I could not see it, this is a review of the catalogue, written by Starr Figura, Isabelle Cahn, and Philippe Peltier, with a brief Preface by by Joan Ungersma Halperin, who is the author of a full biography from 1988.

The catalogue gathers together a great deal of the art Fénéon admired (and, often, collected), along with new essays by numerous scholars, including good essays on his political activities, his work as an art dealer, and his personal collection. He collected many of the artists he championed, and was a major pioneering collector of art from Africa, Oceania and the Americas.

Fénéon was part of the ever-widening circle of artists, dealers, and collectors who were passionately engaged with these objects in the early twentieth century. Most approached them with a romanticizing view that reduced them to the embodiments of an idealized, precivilized state. Fénéon’s interest also stemmed from his anarchist anticolonialism.

The catalogue supplies a useful map of Paris showing where he lived and worked. And we learn that Signac’s painting, whose complete title is “Opus 217. Against the Enamel of a Background Rhythmic with Beats and Angles, Tones, and Tints, Portrait of M. Félix Fénéon in 1890” was one that Fénéon didn’t much like.

In general, however, while providing new information, The Anarchist and the Avant-Garde doesn’t change our general picture of the man as provided by Halperin, whose prior research is repeatedly cited. I would love to read a good translation of Fénéon’s criticism, for that might encourage some young American art writer to imitate him. Halperin’s book provides many short samples of his devilishly difficult French, which she analyzes and translates.

Usually accounts of patronage are frustrating because they lack concrete financial details. It’s important to know how much art cost, for that reveals who could afford to purchase it. Fénéon was not highly prosperous, and so it would be instructive to learn how much he paid, for example, for the 53 paintings and 180 drawings by Seurat that were in his collection at one point or another, many of which are now in MoMA or other major museums.

Fénéon had no real successors in his dual role as writer and gallerist, for reasons that deserve spelling out. Crossover figures such as Frank O’Hara, a celebrated poet and important MoMA curator, Robert Pincus-Witten, a remarkable critic before he became an art dealer, and Jean Frémon, managing director of Galerie Lelong as well as a marvelous writer, do not have the wide-ranging influence that Fénéon had. But nowadays most art dealers are probably too busy to be significant creative writers. Even Fénéon, it is true, stopped writing criticism in 1893, well before he became a dealer.

Blunt, Clark, Aragon, and the other leftist art writers had two quite distinctly different views of painting. Some of them advocated creation of political works that would raise public consciousness. Others were concerned with making great artworks accessible to all. Wollheim took this second position when he spoke of how “art has been segregated from those for whom it was made and turned into a preserve of the rich and arrogant” (The Image in Form. Selected Writings of Adrian Stokes, London, 1972).

What is the relationship between Fénéon’s politics and the art he admired? Patricia Leighton’s essay in the catalogue argues that the anarchism “that motivated his activity in the Parisian art world” is the lens through which “we can perceive the unity of what he wrote, who he supported, and why he thought it was important to do so.”

I don’t agree, for I’m not sure what constitutes anarchist visual art or how his practical activities supported his political cause. But just before he died, he destroyed his papers. And so there’s a lot that we don’t know. Often we speak of radical art, in terms borrowed from politics. But as everyone knows, notwithstanding the progressive political aspirations of many modernist artists, including some championed by Fénéon, those hopes for radical art have come to nothing. At least so far.

Félix Fénéon. The Anarchist and the Avant-Garde continues at the Museum of Modern Art (11 West 53rd Street, Midtown, Manhattan) through July 25. The museum is temporarily closed, but the exhibition, which is organized by Starr Figura, Isabelle Cahn, and Philippe Peltier, with Anna Blaha, is available online.

The catalogue, Félix Fénéon: The Anarchist and the Avant-Garde (2020) by Starr Figura, Isabelle Cahn, and Phillipe Peltier, with a Preface by Joan Ungersma Halperin, is published by the Museum of Modern Art, New York.