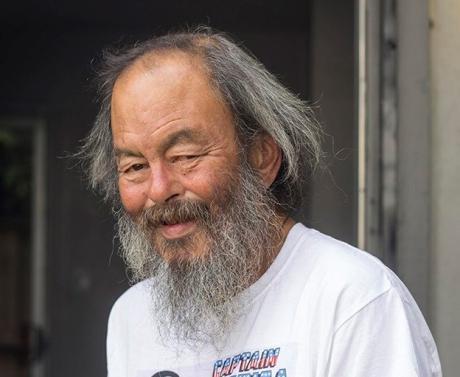 Gus “Mike” Lee, an anarchist militant, passed away this week in Berkeley, California at age 64. He spent decades living on the streets and struggling with other homeless people. He was a wingnut and could be extreme, but was also the most fearless radical I’ve ever met in my life.

At the bottom of this post is an obituary lifted from the Daily Cal (the University of California at Berkeley semi-independent student newspaper), which gives a mainstream, watered-down account of his life that is a piss-poor depiction of what made Mike relevant.

I first met Mike in 1991 during the riots over UC Berkeley’s attempt to build sports courts in the middle of People’s Park, a liberated piece of land located 3 blocks from the campus in the Southside neighborhood. It was hard to miss him, as he was the most uncompromising protester, never backing down in confrontations with the cops. He was also generous to a fault; he’d give you his last nickel and the shirt off his back if you needed it. This despite the fact that he lived his entire life without any of the material comforts of American consumerism (unless they were liberated; see below).

On November 2, 2011, during the Occupy Oakland attempted “general strike,” I ran into an old anarchist comrade who had flown into town from the East Coast to participate, but had lived in Berkeley in the early 1990s and participated in the efforts to defend People’s Park. We talked about the banal pacifism vs. violence debates during the struggle, especially liberals denouncing looting. He remembered our collective line on looting: “if we didn’t unconditionally support looting, Mike Lee would never get new clothes.” After one particularly intense riot down Telegraph Avenue in 1991, many shops across the street from the campus were ruthlessly looted. For the next half year, Mike always sported brand new clothes: a baseball cap and windbreaker which had matching “Cal” logos (the shortened nickname for the university, especially its sports teams) in the the school’s colors. Which just added to his absurdist charm when ranting about the misdeeds of the university.

The next year, the Rodney King Rebellion sparked riots once again down Telegraph Avenue. Suddenly Mike was producing a slick anarchist newsletter, called something like “Steal the Fire,” and was suddenly able to mock up really good looking fliers for various protests. I soon saw why. Mike was toting around a top-of-the-line laptop computer, ironic for a guy who practically lived on the streets. During those riots, an electronics store on Telegraph was looted of almost everything. Suddenly, communal houses of radicals in the neighborhood had high end audio systems and brand new computer equipment. At that time, I read in the Daily Cal that the owner of the electronics shop didn’t have video of the looting, but had an audio recording. When he listened back, he was astounded that as looters removed security cables attaching computers to their displays, they were comparing notes and started selecting their bounty based on their knowledge of the quality of the commodities. Kinda like looter-connoisseurs, doing their own [anti-]Consumer Reports.

I can’t remember the exact chronology, but around that time Mike and half a dozen others created an anarchist living-organizing space in North Oakland, called the “Info Shop Cafe.” It was located near the corner of West MacArthur Blvd. and Martin Luther King Jr. Way (across a vacant lot from where the infamous RCA Squat was during the Occupy period). It was in a ramshackle 3-story apartment building, where the cafe was a street-level storefront, with living quarters in several backrooms. At the time, the neighborhood was still predominately black, but had been heavily scarred by the crack wars of the 1980s. It’s also the neighborhood where the Black Panthers were born. The Info Shop Cafe had some great organizing events, but also some totally insane ones that were unhinged, boozy and that earned the scene the label “wingnut.” I have hazy memories of late night parties leading to confrontations with the Oakland pigs that led to hand-to-hand fights on the street out in front — and usually ended in a few arrests.

Mike was also a strident supporter of Irish unification and the IRA, which was strange as I remember him telling me that his father was of Korean descent and his mother was Filipina (I stand to be corrected on this). It seemed like whenever he got the mike or bullhorn, he would end his speech with an exhortation to “REMEMBER BOBBY SANDS!” His brogue intensified by the amount of beer he’d consumed. I didn’t share his soft spot for Irish nationalism, but I did learn a lot about the conditions of Northern Ireland from talking with him. So much so that once in the early 1990s he dragged me to an IRA bar in San Francisco, The Dovre Club (at that time in the Women’s Building on 18th Street in the Mission District), where we met some Irish ex-pats on the lam from British authorities.

Regretfully, in the last 25 years I only talked with him once. It was at a Labor Notes “Troublemakers School” event at Berkeley City College in 2015. They provided a free lunch and he wandered in off the street, looking to scam a bite — almost like he had radar and knew it was available. He grabbed a sandwich and sat at a table across from me, but didn’t recognize me. I got his attention and said, “Do you remember me?” He looked closely, took a long minute, then said “Fucking aye!” and said my name. We small talked a little, but I wish I had found out more. Yet it was good to see him still alive and apparently sober.

Despite once having a love of nice big bottle of malt liquor (fortified beer, which he usually drank in the 40 oz. size), he was a reliable comrade who could be counted on to show up on time, ready and prepared to fight. And he was also always the last guy to back down against the pigs, fighting fearlessly to the end.

Sadly, Mike’s end has come. He will be sorely missed. Especially his mordant humor and shit-eating grin.

——————-
The obituary below doesn’t do justice to his revolutionary politics and doesn’t mention his anarchist perspective (and glosses over the fact that had contempt for all politicians):

Longtime activist Guy “Mike” Lee died at the age of 64.

A passionate advocate for homeless rights, Lee was heavily involved in community activism for years. Notably, he participated in the occupation of People’s Park to protest UC Berkeley’s plan to build a volleyball court and ran for mayor on a platform focused on homelessness and housing affordability.

Lee moved from Portland, Oregon, to the Bay Area to live with his uncle in Daly City at age 13. In his later teens, Lee moved to the Bay Area permanently and spent much of his life living on the streets of Berkeley.

When he was 62, Lee left the South Berkeley homeless encampment that he had been living in and moved into an apartment he acquired through the city’s Coordinated Entry System.

“I am saddened to hear of the sudden passing of Mike Lee. Mike dedicated his life to fighting for justice and cared deeply about Berkeley,” said Mayor Jesse Arreguín in a statement. “He worked to protect People’s Park, save our Downtown Berkeley Post Office and was a powerful and effective voice for the homeless.”

According to Arreguín, Lee’s 2016 campaign for mayor made the needs of the homeless population a central focus for Berkeley. Arreguín added that Lee’s activism resulted in policies and programs to help the most vulnerable people in the city.

According to Andrea Henson, former lead organizer of the “Where do we go?” homeless encampment and advocacy organization, Lee was known for his strong opinions and supported “Where do we go?” from its inception.

“We need more of that. We need more people who are ready to run for public office and engage in a dialogue,” Henson said. “He was an active participant in democracy who didn’t compromise what he believed in.”

According to Henson, Lee could always be counted on to attend meetings surrounding homeless issues, never letting his struggle with chronic obstructive pulmonary disease stop him.

“He was a complicated guy; ‘uncompromising’ and ‘hardheaded’ would be the words that would come to mind. Also, ‘kind,’ ” said People’s Park Committee member Lisa Teague. “He always was very concerned about making sure that people get fed, and that comes from kindness.”

Teague added that Lee had a “wicked sense of humor” and was never afraid to “shake up the status quo.”

City Councilmember Sophie Hahn recalled how Lee worked hard to help homeless individuals while living on the streets himself and how he continued to advocate after his own rehousing.

“He was a brilliant and persistent advocate, and worked hard to help the homeless find comfort and stability, even while living on the streets,” Hahn said in an email. “He expected more from society and government, and always knew he was fighting not just for the homeless, but for basic human rights.”

————————
A retort to the above: Mike’s mayoral campaign was a prank. He detested politicians and I’m shocked to see them say such polite things about him. In the early 1990s, the University of California tried to censor him with a SLAPP suit, along with 3 others, during the struggle over People’s Park (2 others passed away, Dave Nadel and Bob Sparks; Carol Denney is the lone survivor).

The contagion of revolt spreads…Revolts everywhere!