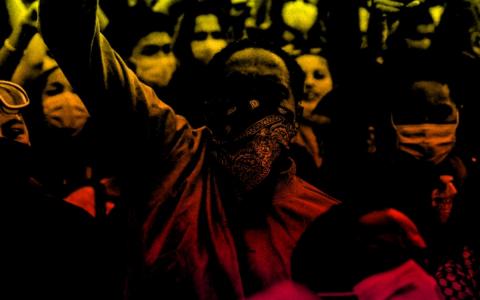 On this episode of the It’s Going Down podcast, we speak with educator and author Marquis Bey, author of the new book, Anarcho-Blackness: Notes Towards a Black Anarchism, out this month from AK Press. From the book’s description:

“In this bold and expansive treatise, Marquis Bey seeks to define the shape of a Black anarchism—not, he says, by listing “all the Black people who are anarchists and the anarchists who are Black people,” but though a fluid and generative encounter between anarchism and Blackness.

Classical anarchism tended to avoid questions of race—specifically Blackness—as well as the intersections of race and gender. Skeptical of satisfying himself with the usual finger-pointing this lack invites, Bey addresses it head on, not by constructing a new cannon of Black anarchists but by outlining how anarchism and Blackness already share a certain subjective relationship to power, a way of understanding and inhabiting the world. Through the lens of a Black feminist and transgender theory that unsettles and subverts social hierarchies, he explores what we can learn by making the kinship of Blackness and anarchism explicit, including how anarchism itself is transformed by the encounter.”

During our discussion we talk about what anarchism and Blackness bring to each other, autonomous and stateless forms of life that resist radicalized capitalism and the State, how abolitionist, Black feminist and transgender theory has influenced these ideas, and touch on the recent rebellion in the wake of the police murder of George Floyd.

Criminal Investigations Department Building Petrol-Bombed by the ‘Brave Ones’ Group

Rambles in the Fields of Anarchist Individualism — No. 3