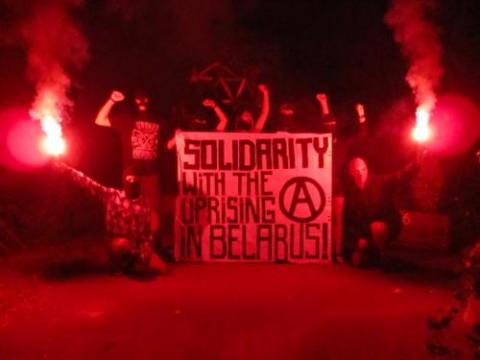 Berlin, Germany: Solidarity with the Uprising in Belarus

Since the 10th of August, people across Belarus have started to revolt against the Lukashenko dictatorship. In countless demonstrations they clash with the police, not letting state brutality and thousands of arrests stop them. The militant resistance against the state was primarily instigated by last weeks obviously rigged elections. But over time, the Belarusian people have slowly started to doubt the entire political system, that has been in a deep economical and political crisis for years.

In this situation, the anarchist movement is almost the only political force agitating at the base of society, offering a real alternative to (state) capitalism and oppression. Therefore it is involved at the center of the current uprising, as well as supporting those who were hurt or arrested.

As internationalists we declare our solidarity with the peoples uprising in Belarus and call for the support of the anarchist forces in Belarus.

What Pirates Taught Me About Anarchism