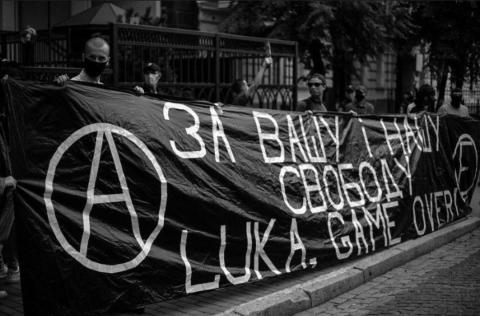 Finally, we face the outrage of Belarusian people in the streets. The increase of resistance is enormous. Many people say that such an uprising was never seen before during the rule of Alexander Lukashenko. These three nights, probably all the world has seen crowds of people giving fight to the police special forces, using barricades, burning tires and Molotovs.

The police (or “militia” in Soviet-fashioned Belarus) reacts with great violence. Many people got seriously injured and there is one confirmed killed protester.

There is also the call for the General Strike issued by the opposition. How successful it will be is yet to be seen. But there are first confirmed reports of strikes at several State-owned enterprises today (August 12).

As it often happens in Eastern Europe, it was elections and electoral fraud that served as the starter for people’s unrest. However, deeper roots of the situation are long autocratic rule of the president, poverty, lack of prospects and opportunities. A big role in the current revolt is also played also by the inhuman policy of the government during the Coronavirus epidemic. Authorities decided to simply ignore it and made several scandalous statements. This ended up with a wave of infection and also a huge grassroots organizing of the society against the danger of the virus.

Of course, one of the first impressions in our minds is to compare the current protests to the Ukrainian Maidan. There are certain differences. First of all, in Belarus, there is no option yet to organize a sort of “camp of protesters,” a free zone, as the rear of the protest, which we saw from Kiev to Seattle. Militia and other “internal forces” are still much more violent and in control of the situation in comparison with Maidan.

Even more important is the lack of structured political forces of the opposition in Belarus. In Ukraine, we had plenty. The reason is de facto state monopoly on politics and continuous repressions. In contrast with Ukraine, the real far-right is very marginal in Belarus. There are some “national democrats” who are actually close to right wing liberals, promoting “Western orientation,” “market economy” and national identity with emphasis on distancing from Russia.

The lack of political forces is the weakness from one point of view. However, at the same time, it opens space for more popular spontaneity and maneuver, less dependence from the leaders of “alternative establishment.” And the most important of all — this situation leaves the door open for developement of new political forces and entities.

In this political landscape, anarchists are more visible than in Ukraine or Russia. In oppositional circles, they have the reputation of quite “hardcore” enemies of the regime who suffered very strong repressions, which is true, and also are always in the frontline of the resistance. The reverse of this image is that anarchists are seen more as eternal fighters, which can be a sort of “ram” of the changes, but then are supposed to give way to more conventional politicians.

For better understanding of current situation, it is also important to notice that several current oppositoinal candidates for presidency, Viktor Babariko and Valery Tsepkalo, are often suspected to be Putin proxies. This version looks quite realistic according to their background. Vikor Babriko, before his presidential campaign, was the head of a Russian-owned bank and Valery Tsepkalo, ex-diplomat in Lukashenko’s state apparatus, flew to Russia when it became dangerous for him to stay in Belarus.

From riot to revolution

Today the whole protest movement shows a very simplistic demand: resign of Lukashenko and new “honest” elections. It helps to maintain the superficial unity of the protesters. But surely, this situation cannot last long.

The specific of Belarus is state-ownership of the huge part of the economy. It is the basement for extracting wealth by state bureaucracy and capitalists close to the ruling clique.

It is highly predictable that once either pro-Western or pro-Russian politicians are in power they’ll try to launch large-scale privatization and transformation this merely State-capitalism into the one ruled by external actors, i.e, international monetary organizations and Russian business-elites.

In this context, the program and the call of revolutionary forces should be both clearly anti-authoritarian (Lukashenko MUST go) and also socially-concerned. We need to counter the ghost of privatization by promoting the turning of state-owned enterprises into municipal and collectively-ran ones, decentralization and democratization of different sphere of social life: self-defense, healthcare, education. At the same time, all social obligations for free access to different services monopolized by the state today should be promoted and developed.

To be short: if anarchists of Belarus will be able to play key and organizing roles in the development of the popular uprising (while all opposition leaders are clearly confused now), then they have several prospects. As a minimum, to present actively the anarchist movement and its message, to make it known broadly within the population. As a medium goal, to become significant political actors, which will influence the social development of the new Belarus in terms mentioned in the previous paragraph, to take a foothold in infrastructure, media-sphere and society for rapid further political development. As a maximum… who knows our real limits?

Ben Turk on Updates and a Future for Prison Abolition