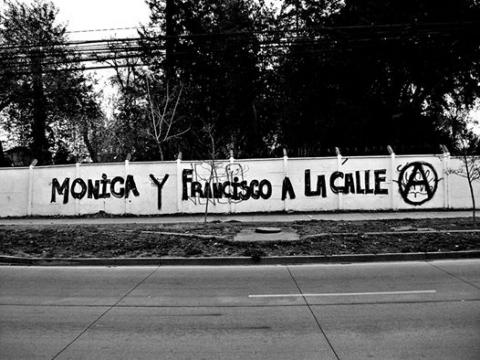 Greece: Words from Anarchist Prisoner Dinos Giagtzoglou for the Day of Agitation & Propaganda in Solidarity with Mónica & Francisco

[Chile: Day of Agitation & Propaganda with the Anarchist Prisoners – 14 August 2020]

Just like today, 10 years ago, the Chilean State carried out an extensive repressive operation against comrades and anarchist operations in response to the dozens of bombings against symbols and institutions of the State and Capital. This operation, which led to the arrest of ten anarchists and became known as the “Bombs Case”, ended in a fiasco, as the five who were eventually prosecuted were completely acquitted, and were described by the press as the biggest defeat of law enforcement authorities in court history. Today, two of our comrades, Monica and Francisco, who were among those arrested at the time, are again imprisoned in a State that a few months ago slaughtered a massive social uprising that shocked us all.

Arrest and imprisonment are nothing new for our siblings, since in 2013 they were found in the cells of the Spanish State accused of an attack on a cathedral in Zaragoza by the Insurrectional Commando Mateo Morral. The comrades are once again accused of a series of bombings against representatives of the rich, powerful and their defenders in Chilean territory. The attacks included the shipment of two booby-trapped parcels, one of which exploded, leaving eight cops injured (3 of them seriously) at a Santiago police station and the other being located before hitting its target at the subsidiary offices of one of the largest business consortia in Chile (owned by the fourth richest family in Latin America) having as a recipient the head of the legal department, who had served as Minister of Defense and Interior during the crackdown on anarchists known as the “Bombs Case”.

After so many years of persecution and imprisonment, relentless struggles inside and outside prisons, they remain steadfast and convinced of the right of the liberation struggle. It is such examples of combatants that have motivated me too to take subversive initiatives and make choices of resistance to domination and exploitation. In such paths of struggle we want to and must walk constantly with love for life and freedom and without fear for death or prison.

With the undimmed memory of Mauricio Morales,

With passion and determination,

With stubbornness and commitment,

With my head high,

From the bottom of my heart I send a rebellious signal and a big hug to Monica Caballero and Francisco Solar.

Chile: Words from Comrade Joaquín García Chanks on the Arrest of Mónica and Francisco

It seems that Denial does not give rise to any unshakable Truth, Reason or Logic, that from the fight against the falsehood of the existent, only a path sown with doubts results, in which the present and the future are blurred, with a diffuse tinge, a dense fog in which it will always be difficult to navigate, but there is something that brings clarity back to this path; It is the compass of confrontation that appears as the reason behind the inseparable notion of a symbiosis of theory and practice, the point of view of an existence, sometimes errant.

The dynamic of the combat shakes existence to bring it back to life, endowing it with the Fieriness that boredom and monotony often extinguish; the construction of an antagonistic existence then brings with it the capacity to live far from the virtuality imposed by a normality dictated life, the blow by blow of the joyful attack, impeller of the mythical creative destruction and the suffering of when we are not the ones who attack, of prison, death, which flirts with subversion, are the flavors of life, real life, bitter drinks and ambrosia.

Today we are drinking from that bitter drink; two dear brothers and sisters are arrested and charged with placing multiple explosive devices, including the one sent to former Interior Minister Rodrigo Hinzpeter and one sent to the fifty-fourth police station in Huechuraba. It is undeniable that both beautiful attacks speak of historical continuity, of the blow of memory that does not forget. The Power disrupted and fearful with the arrest of the alleged perpetrators, who remember, that the revolt was not the culmination of a rebel ecstasy, it is the creation, the turning point of hundreds of lives in combat.

A big hug from afar, full of love, affection and strength for you, Monica Caballero and Francisco Solar.

Chile: Words from Comrade Juan Aliste Vega on the Arrest of Mónica and Francisco

A little less than a month after the arrest of our comrades Monica and Francisco at the hands of the state police apparatus, guardians of power and custodians of the interests of the political bourgeois caste of this territory.

Monica and Francisco in prison and hostages of this capitalist state that judges and sentences them from the first moment in which the fascist administration mediatically installs its servile legal machinery in their consequent lives.

They are comrades who hold a position of walking freely and have fertile convictions.

I embrace them with unconditional strength and tenderness with a heart full of complicity.

As an enemy of this state I raise the writing for the beautiful way of recognizing ourselves in the word transformed into acts and thinking into subversive action.

United in the embrace of war that transcends walls and frontiers, a tireless heartbeat that flows for the elimination of all forms of submission.

It’s daily combat against any presentation of power. It is anarchy present with libertarian oxygen that does not stop pumping from the black hearts more reasons to continue this struggle.

Prison is no stranger on this path, our lives are not measurable in costs, there is constant learning, there is unwavering decisions of confrontation and direct action, tangible indicators that it is not only possible to wage battle but to be free.

We are united in the embrace of war that transcends walls and borders in this continuum of struggle.

Walking with rebellious dignity and a subversive stare that penetrates outside the prison towards total liberation!

As long as misery exists there will be rebellion!

Chile: Words from Comrade Marcelo Villarroel Sepúlveda on the Arrest of Mónica and Francisco

Ours is the conviction!!!

Indestructible our desires and-

Infinite the reasons and motives for continuing in this war to the death against the state, capital and prison.

21 days ago we woke up with the news pounding in our ears. Monica and Francisco were arrested. This time accused of being the direct authors of various explosive attacks in Santiago last year.

Clearly the State’s permanent offensive through its repressive apparatus, its penitentiary legal fabric and its servile and business press draws the caricature on our brother and sister as the perfect culprits for those who expect all the rigor of the law of domination.

The decision of the power is the exemplary punishment that seeks to serve as an example and to eliminate the offensive resistance as an insurrectionary practice of attacking the existent.

Our comrades today face a tough fight. The power block making use of its tools advances hard sentences.

Our words, born from a long resistance to the forced stay in confinement, seek to point out certainties and convictions.

One of them is the correctness of our rebellious and insurrectionary actions.

Another is that the struggle for the destruction of the prison society is an imperative need. Of vital urgency in these times of control, repression and death.

The enemy deployed throughout the territory acts with all its henchmen in the street and in this inevitable confrontation today our comrades appear as the inevitable recipients of the full weight of the law as they become part of this contingent of comrades who navigate this bleak landscape of confinement in a context of permanent and endless conflict.

Social warfare becomes common sense and necessity through the legitimacy of multiform violence as a liberating practice of rebellion, but it also gives birth to prisoners, fugitives, escapes and deaths. This is the reality of the conflict.

We can never forget: there will be more and more persecuted, fallen, and escaped, but in the same way there will be comrades going on the offensive, giving continuity to this struggle for freedom, for the land, against capital and against all the attacks that prevent us from living.

From this cell, where my thoughts fly to the ones you live in today, I embrace you, my comrades, in this new uphill journey that we will surely know how to make.

Monica, Francisco and all the prisoners of the social war, of the Revolt and of the Mapuche liberation to the street!

While there is misery there will be rebellion!

Arson in Solidarity with Terra Incognita