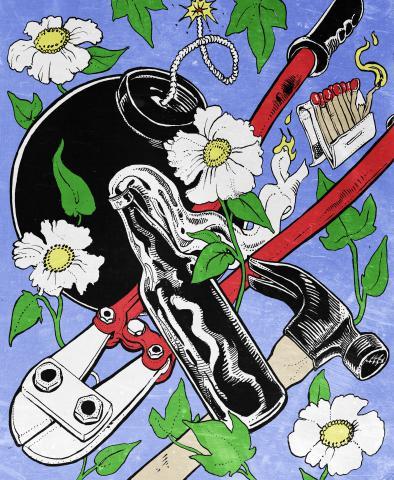 For the past five days I have watched batons smashing into the faces of the working class. I’ve watched people be shot and trucks plough into yet more without any sense or reason other than the sick poison that oozes in the hearts of the police.

I’ve watched children get smacked around and listened to women talk about the police beating and sexually assaulting them in the backs of vans and while locked in cells. I’ve seen hours of footage both broadcast publicly and shared through private channels that has sickened me. I’ve spoken to comrades both local and in the diaspora who’ve kindly taken the time to share their concerns and report on events.

I’m listening to Belarus cry out in the birth pains of a revolution and watching the death throws of a totalitarian regime. They tried to squish the revolutionary movement before it had began, they failed. The moment the factories stepped out and long muted resistance sprang up across the country the future of Lukashenko was sealed. The future of Belarus is being written now on the streets and at the factory gates.

This began last Sunday (9th of August) Belarus was put through an election rife with fraud, by the end of the day 50,000 people from all walks of life had descended onto the streets of Minsk. The police response was brutal with some 3000 arrested, hundreds injured and at least three protestors lost their life. The next day there were hundreds of thousands on the streets of at least twenty cities. Factory workers went on strike and Anarchist affinity groups erected barricades. The aims are clear to all. Lukashenko must be removed.

In over 20 cities huge numbers of working class people are fighting for their future, to find liberty from underneath the boot of Lukashenko. Like any popular movement they come from all walks of life and across the spectrum of politics, from the anarchist affinity groups that have existed underground for years to the all manner of nationalists, neo-liberals and progressives. They are not united by the politics they desire but by the politics of those they need to break free from. As comrade put it;

“For sure, there are people in the demonstrations with a wide range of different political views. Most of them don’t define themselves politically at all. When miners go on strike because they don’t agree with the corrupt state government and the exploitation that their bosses are engaged in, do we try to determine their exact political identity as communists, anarchists, or liberals? Trying to define this huge crowd of hundreds of thousands of people who have suffered through humiliation, exploitation, and oppression for the last quarter of a century seems ridiculous to me. For me, there’s one obvious fascist: Lukashenko”

It is vital that we listen to our Belarusian kin, and amplify their voices. The working class have no borders between us, no nations to tear us a part. We feel the pain of injustice wherever it occurs, whether that is Brest or Bolton. There can be no question in our minds that the working class of all lands must know that they do not stand alone.

Speak up and share your solidarity.
Belarus, you do not stand alone. ■

Read about the situation:

Belarus: Anarchists in the Uprising against the Dictatorship
https://crimethinc.com/2020/08/12/belarus-anarchists-in-the-uprising-against-the-dictatorship-an-interview

Call for solidarity actions with the uprising against the Lukashenko regime – 14 August
www.abc-belarus.org/?p=12980&lang=en

Belarus: ‘without organisation, without struggle, the oppressive unfreedom will never disappear’
https://libcom.org/news/belarus-without-organisation-without-struggle-oppressive-unfreedom-will-never-disappear-140