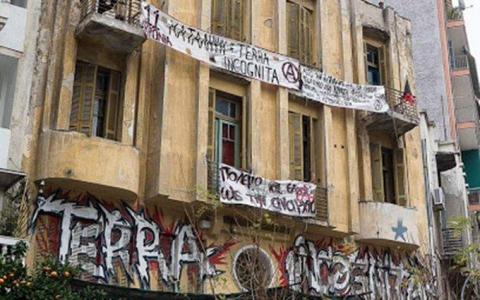 Thessaloniki, Greece: Announcement by Terra Incognita regarding the Eviction on 17.08.2020

This morning (17/8), around 5 am, the uniformed scum of the greek police invaded Terra Incognita in Thessaloniki, which is a building that has been occupied since 2004 and constitutes a landmark of struggle and the anarchist movement in the city.

The cops proceeded to evacuate the building, while technical and material equipment was confiscated and a large part of the resources within the building have been withheld.

More specifically, equipment from the following anarchist infrastructures housed within the squat, was confiscated: the medical -first aid infrastructure, the gym, the library and the printing infrastructure, as well as a large archive of posters and other printed material that date decades.

Since the first moment, the cops were joined by the well-fed lackeys of the media, which, after starting their “ethical” service of reporting fake and unconfirmed details regarding the arrest of one person (which is a lie), eventually took to enacting the smear campaign and “copy-paste” reports which they have the habit of doing during similar operations of repression.

Soon, near the squat, around 100 solidarians gathered and gradually marched toward the building, which was surrounded by cops, and they chanted slogans in support of squats and the anarchist struggle.

When the state signs agreements with large tourist businesses and “ecological development” contractors for the benefit of the capital, when it fights for the interests of energy giants by playing openly with the possibility of armed conflict, when it warehouses helpless people in detention centers for immigrants and forces them to live their daily lives in deplorable conditions, when it shoots people at the border and drowns people at sea, when it violates the right to protest and attempts to smash workers, when it blames people for the spreading of corona virus in order to cover its own crimes against the healthcare system, it also does not tolerate any voice of resistance in its interior.

So, it is not by accident that the state has chosen to proceed to attacking an infrastructure of the anarchist movement which has stood against the state consistently in each and every way the former has mistreated the oppressed.

Our squats and infrastructures are a very important instrument in the struggle for social revolution and anarchism, as well as our daily resistance in the world defined by authority. Definitely, such a move constitutes a significant attack against the movement as a whole.

But buildings can be reoccupied. Infrastructures can be built again. The relationships and processes which take place within them can never be repressed by states, cops or authorities.

What matters is the continuation of the struggle against the state, the capital and every form of authority. The struggle will continue as long as the ideas of liberty and anarchy live in our hearts and minds.

They wanted to bury us deep, they forgot we were a seed

Terra will forever remain a squat

Get your hands off our squats!