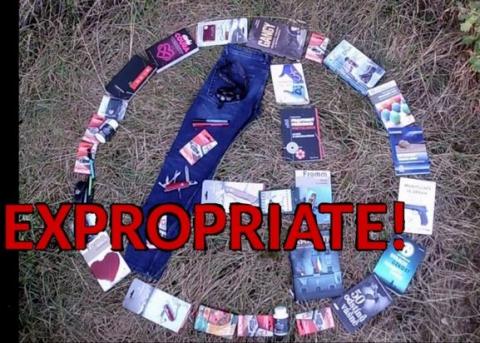 From Magpie Project via Anarchists Worldwide

Czech Republic: MAGPIE PROJECT – We Will Not Pay for What has been Stolen from Us

Lukáš Kalina, Zdeněk Vítek, Lubomír Sogel, Tomáš Tichánek, Václav Šupka and many others. They all took goods in the shops without payment, and the courts imposed severe penalties on them.

This perverse practice cannot go unanswered. That is why the MAGPIE PROJECT starts. Other goods will disappear from stores and the capitalists will not get money for it. People will use expropriated goods to meet their needs. We will explain why this is happening. We will encourage others to participate as well.

It is not a crime to take goods from the capitalists without paying. They themselves act criminally when they accumulate commodities by exploiting employees. They let them work hard, but they give them only a small part of what they have created with their work. They capture the rest and invest in the next cycle of exploitation. This is theft! This is a crime! Remove the stolen values ​​from these thieves is not a thievery. Contrary to the preachers of Christian-bourgeois morality, we argue that expropriation is a legitimate form of reaction to a world where the path to one’s wealth is paved with the poverty of the other.

Judges and guards imprison human beings. The hypocrites are mumbling about the theft, but they are stealing people’s lives and destroying interpersonal relationships.

Capitalists throw away tons of food and other things every day and do everything they can to prevent people from getting them without paying.

They are unlucky because, even if some are punished, many disobedient people will continue to expropriate. Many of these will never be caught. And if so, they won’t curb them anyway. From the malls it is possible to move to greater goals: to the banks, accounts, settlements and equipment of the bourgeoisie. Just do it!

The MAGPIE PROJECT needs another accomplice. Get involved! Send your stories, videos, photos to publish. Don’t forget safety and don’t get caught!