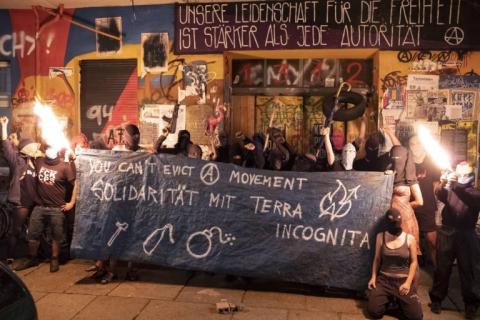 Berlin, Thessaloniki : HANDS OFF THE SQUATS-Solidarity with Terra Incognita

In the morning of monday the 17th of august, cops raided and evicted the squat Terra Incognita in Thessaloniki (in Greece) that had been squatted since February 2004. A political space which stands as a thorn in this society of their “normality”. A structure which was open to all the marginalized and the oppressed individuals and groups of this society. A space where comradeship, friendship, collectives and politics from below were created and taken part in. It was an important center of struggle of the anarchist movement in the city.

What’s happening in Greece and other places does not surprise us, this dogma of “law and order” which tries to get implemented by New Democracy’s regime is not something new. We see it as an open procedure of a continuous attack from the “above” which belongs in every state’s agenda worldwide. We recognize that the states globally take an authoritarian position against our spaces. It is an attack on our anarchist and self-organized structures also here in Berlin with continuous threats of eviction on our house projects, collective bars and autonomous neighborhoods.

Wherever in the world, an attack on our structures will not remain silent. Squats for us are the biggest parts of our struggle against gentrification, tourism, which serves the profit of capitalism and the “clearing” of our neighborhoods. Places which are against the blackmail of the bosses and the repression of the cops, the implementation of self-organization, places of liberation from the tyranny of the state, capital and patriarchy. An important tool for the anarchist movement in order to get collectively organized and fight for a society based on equality, solidarity and freedom.

Every eviction has its price! We send our solidarity greetings and much strength to Terra Incognita.

With love and rage, Rigaer 94