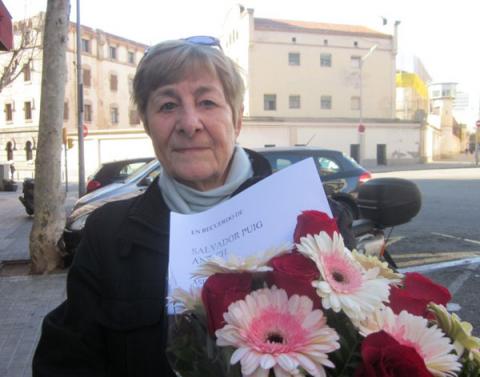 “I am not one of those heroic women who have tenaciously committed themselves to the fight against tyranny and in favour of a more just and more humane society and who have risked their lives in this struggle; nor am I one of those women who entered history for her life and work. However, the example of so many brave women inspired me to contribute something, in my modest way, in the struggle for a better world”.

Doris Ensinger was born in 1944 in Germany, near Magdeburg, where she spent the first years of his life. In 1948, her family fled the area occupied by the Soviets towards Bavaria. From 1964 she studied translation at the University of Saarbrücken and it is there that she became involved in student revolt.

In the seventies she actively participated in the Munich alternative movement and lived in flats organised according to the tenets of anarchist collectivisatiion as practised in Spain in 1936. In 1977 she met the well-known anarchist activist Luis Andrés Edo (see his biography here at libcom) in Barcelona and they fell in love. They lived together for the next thirty years until his death in 2009, sharing many activities in the anarchist movement. From 1981 to 2010, she taught translation, civilisation and culture at the Autonomous University of Barcelona at the Faculty of Translation. She authored a book on her relationship with Edo published by Barrikade in Germany under the title Whether denken, gerade leben – Erinnerungen an mein Leben mit Luis Andrés Edo which then appeared in Spanish under the title Amor y Anarquia (Love and Anarchy).

Doris was to say: “At great events I was with him, but not in the front line. I did not like public speaking or being a protagonist, I preferred to help organise or document the events. I am not a heroic woman, but I have defended my ideas fearlessly in other areas, as now in this book.”

There’s now a newly translated 2006 interview with her on the KSL site: https://www.katesharpleylibrary.net/ksn1qw

Demands of and for a Union of Sandwich Artists