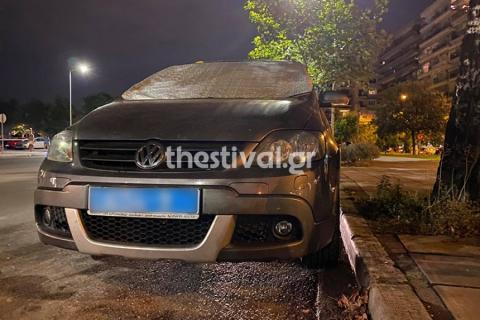 At dawn on August 17, garbage in uniform invades and evacuates the occupied Terra Incognita. They seize equipment and logistical infrastructure, amid a frantic feast of state terrorism and a media culvert. But the comrades of the occupation with their heads held high show us the way to the struggle and not the victory of the state and the neo-liberal repressive strategy: But buildings can be reoccupied. Infrastructures can be built again. The relationships and processes which take place within them can never be repressed by states, cops or authorities…

The occupation of Terra Incognita during its 17 years of presence and action, writes in big letters in the history book the word Consistency. And defending both the occupation and the comrades who are in the crosshairs of repression during this period is a non-negotiable revolutionary duty for all of us. We claim responsibility for the arson attack on a vehicle of the diplomatic corps on Megalou Alexandrou Street, on the night of Tuesday, August 18, as a first reflexive action of aggressive solidarity and response to the plans of state repression. We are at war and our solidarity is a weapon that has the bullet in the chamber.

Solidarity to the occupation of Terra Incognita

Strength to those who defend the intransigence of human dignity…

(via Athens Indymedia, translated into English by Anarchists Worldwide)