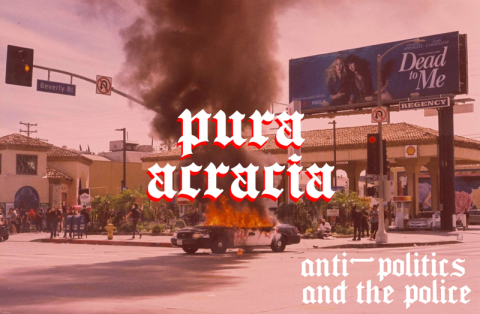 What follows is a series of anti-political arguments against the police, politics y más.

Politics itself is the policing of freedom & unfreedom. Freedom, as we are taught in American schools, is not freedom itself.
It is a doctored variation sold to us. It helps maintain the assumption that the perpetuation of American politics is itself tied to perpetuation of freedom. (“Vote or don’t complain!”)

Nothing could be further from the truth.

This is why those of us with an anti-political position say we are for anarchy: freedom is a word with too much American patriotic baggage.

For the purposes of this piece, I will refer to the condition of territorial statelessness (which is akin to freedom) as anarchy.

But then what is anti-politics? Is it the inversion of politics? (Many radicals see radical politics as a grand inversion of bourgeois politics: now the people are in power. A formulation I disagree with, which I’ll get to later.)

Anti-politics is the active negation and consequent abolition of politics.

But what is politics? With the development of ancient Greek democracy, the polis (where the term politics emerges from) denoted a body of citizens who have a direct say in local governance. Politics is that which concerns the polis. And what is citizenship? Adherence to and recognition by the State. A dividing of the population.

But not all citizens under the current racial regime of Capital are equals.

In Black Marxism, Robinson shows this is by historical design. Black people have been held outside the realm of the State’s formal equality since the inception of capitalism and continue to be so even after the supposed end of chattel slavery.

I stand against anti-blackness and the marker of race, which always also means standing against policing. The State is the wing of direct anti-black domination and the police its foot soldiers. Thus I am against the State even in its democratic forms.

Politics is that which is used to mediate between contentious bodies. A perpetuation of antagonistic contradictions, rarely their resolution: to form a social peace to ensure the perpetuation of the current racial regime of Capital. To keep the money flowing.

The perfection of politics can be found in democracy: class-collaboration at its finest. As the writers of Dixie Be Damned put it, “White supremacy’s greatest ally in this country has been democracy, not fascism.” But the anti-blackness of the racial regime of Capital is more than just a formalized White supremacy.

To be an anarchist then is to not only be against the State but also against politics.

Because as @nkoyenkoyenkoye puts it,

The police as protectors of the political order physically embody the law: the bureaucratic wing of the State. The formalization of dominance.

The latest wave of Black revolt and the riots it has sparked have had an explicit target: the police and their power deployed to protect property against Black life. But some bristle at this target.

I recall back in 2014 a white communist asking in a reading group, “when will people rise up against indirect domination and not just direct domination?” Which is Euro-Marxist speech for, “why are Black people fighting the police and not the wage-relation?” As though the two are not linked.

A now common refrain by the radical milieu is that the recent riots worked. That they have produced results that would have not occurred otherwise. This is true. The history of revolt in the so-called United States of America is a testimony to this.

But the instrumentalization of the riot as a thing that ‘works’ misunderstands the riot. This is projected onto the riot after the fact. It is an attempt to make the riot political. To make it legible to State power.

Though the riot, as expressed by racialized proles, is essentially anti-political. The white racist riot is fascism in its extra-legal street mode (see the Tulsa Race Riot & the Zoot Suit Riots).

Rioters are indeed often the disenfranchised, but the riot is not an act for integration into the racial regime but an act against it. Rioters are not trying to communicate a program to be fulfilled by the State as much as acting directly and openly against the present state of things. Otherwise a peaceful march ending with a stage and a list of speakers is in order.

Thus the conclusion of an anti-police (as well as anti-carceral) position is anti-politics.

Some say we need another politics. I say the world of politics has had its day and those against it are the ones who will carry the day to freedom.