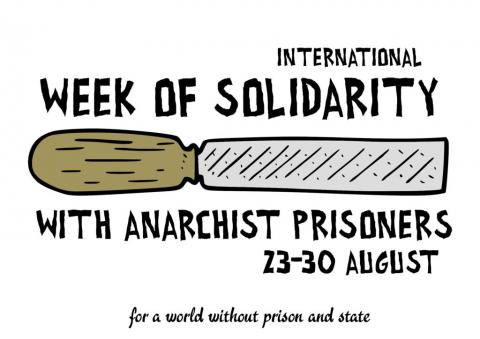 Let us break the illusion that prisons are impenetrable fortresses, insurmountable barriers and airtight containers. There’s a long list of prison escapes, and many more who went unrecorded. We know of historical prison riots, as well as recent prisoner unrest across U.S.A. and Canada, riots and even mass prison escapes throughout the world, for example in places like Haiti, West Papua, Italy and many more. Real stories of prison breaks have liberated popular imagination since the invention of prisons. You can find many different of “Top 10” lists of prison escapes on the Internet, and it’s often featured as the main plot of popular movies and T.V. series. As anarchists we a have special vested interest in this topic.

Tell us all your favorite stories of escapes from prisons!

Including: factories, schools, psych wards, Sean Swain spoke about this:

“Don’t forget, however bad you’ve got it, others less capable than you have gotten through longer chunks of time in far worse conditions. I did a year with virtually nothing, on starvation rations, with very little soap, locked in a space the size of a bathroom with another poor bastard. We were both idiots, and yet we both survived. You will too. Resolve to survive this. Walk around your living space. Tell the walls: “You won’t defeat me.” Tell your couch: “You won’t defeat me.” Tell all your furnishings: “You won’t defeat me.” Then look in the mirror and tell yourself: “This won’t defeat me.” And mean it. You have two choices, flat-out. You can survive this, or you can sit down on the curb, and sooner or later the dogs and the birds will eat you. It’s your choice. I’ve made my choice. Hope I see you on the other side of this shit. This is anarchist prisoner Sean Swain in exile from Ohio at Buckingham Correctional in Dillwyn, Virginia. If you’re surviving, you are the resistance.”

He’s also spoken about how one could imagine taking it all down:

See, a long time ago, I finished a three-part zine, Ohio. I intended it to be three parts, each part presenting an argument for the illegitimacy not just of Ohio, but of the whole hierarch delusion. I had no intention of re-visiting that zine…until this latest round of state terror that convinced me that I should write Ohio, Part IV, which would essentially address the question of what we ought to do about it. I wrote that. Got it out. Friends are presenting Ohio to Little Black Cart for publication. So, if I’m dead – and I hope I’m not – get Ohio, read it, and gather a few thousand friends and do it.

[…] First, we need the development of a statewide database much like blastblog.noblogs.org – a blastblog 2.0, maybe – where all Ohio officials’ home addresses are posted…from county judges and prosecutors to the governor and all of the legislators…along with courts, courthouses, prisons, colleges, and anything essential to the operation of the hierarch program.

Second, we need folks transmitting 12 Monkey materials into every single Ohio prison. Those materials can be found at:

[…] So, Ohio is like my single-most ambitious effort, my contribution to the ongoing and evolving dialogue on how to most effectively bring the inimical system down, my vision of resistance.

During this International Week of Solidarity with Anarchist Prisoners we focus our attention and our solidarity towards anarchist prisoners. Neither innocent, nor guilty; simply anarchists.

As Gustavo Rodríguez has recently spoken on this matter here:

Let us be in solidarity with OUR prisoners and fugitives in all latitudes, with which we share affinity. Let us abandon the charitable missions and the role of chaplains -the time has come to leave the “volunteer work” to the Church and to the abolitionist liberals – let us stop wasting time and resources in prisoners that are not our own. We have to demonstrate, once again, that solidarity with OUR prisoners is not a dead letter. Direct solidarity, here and now, with the beloved Alfredo Cospito and all the anarchists incarcerated around the world. Direct solidarity with the Greek comrades of the Cell of Fire Conspiracy (CCF). Direct solidarity, with our fellow fugitives Gabriel Pombo Da Silva and Elisa Di Bernardo (free and dangerous!), stalked again by the State (Spanish and Italian).

That is why, when we declare that anarchic solidarity is more than words, we not only refer to our accomplices in their struggles and, to the economic and emotional support of our prisoners, but we also ratify the foundations of our struggle. Of course, there is no more appropriate support for our imprisoned comrades than to coordinate their escape or to blow up the bus that transports their jailers, but we don’t always have the means for these spectacular actions; nevertheless, there are many ways to show our support and to concretize solidarity with imagination. There are an infinite number of actions capable of obstructing the prison complex and these only require a little prior investigation in order to be carried out. Of course, any attack on the system of domination beyond the symbols will always bring them joy by evoking the smell of gunpowder and its implications.

Tell us how would you help break out others from the outside of these prisons!

Remind us of the recent actions in solidarity, like those against ICE detention facilities, and of historical accounts, like the extortion of a banker to call attention to political prisoners under Franco.

Tell us of your favorite accounts of anarchists’ defiance in the face of examiners, juries, judges and executioners. Of the defiance of anarchist within prisons; like hunger strikes; letters from prisoners, to people outside and even withpeople inside other prisons (or even podcasts with each other!!!) that show us that even within those walls they are fighting for freedom, evolving their ideas, paying attention to the outside world, and engaging in conversation with us.

Until we can finally say goodbye to prisons!

Surviving the Virus: An Anarchist Guide