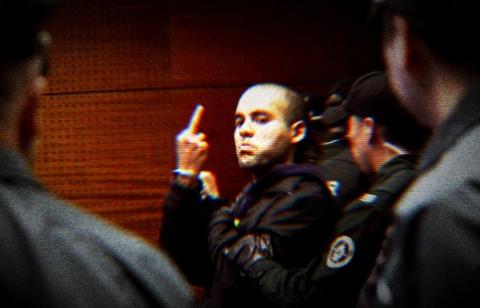 We knew that by choosing the path of struggle against capital, our lives would develop against all odds, and it was not unknown to us that prison could be a possible destination.

We questioned this humiliating reality and its so-called “social peace”, we severely questioned the enrichment of the bourgeoisie and their power. There are really too many questions to take a stand against the prevailing order. Countless have been the assassinations by the repressive forces of the power, countless those insurgents who have given their lives looking for the sharpening of the conflict against the states.

Did the elite of this country believe that we would stand idly by after all their years of misery, alienation and neoliberal exploitation?

How could we not try to be the stumbling block against the uninterrupted advance of capitalism and the states?

A constant attack against the enemy we have made of our lives, which extend infinite complicities of an idea that lives in a multitude of hearts, a consequence of the reality of positioning against the enemy. This is how our lives are, this is how we chose it, against all odds we will advance without restraint along the path of subversion, beyond its borders, beyond its criminalization and Hollywood investigations, beyond its convictions and prisons, reality demands action from us. Our only option is to maintain the struggle for total liberation, facing with dignity the consequences that this may generate in our lives.

These words are addressed to those daredevils who, without looking back, have defended anarchic and anti-authoritarian ideas with their teeth and claws. Monica Caballero and Francisco Solar are hermanxs [brothers & sisters] with deep convictions and critiques that are impossible to break with this new blow of power to their lives.

To the comrades of the Conspiracy of Cells of Fire and Revolutionary Struggle, imprisoned in the prisons of Korydallos Greece.

To the anarchist brothers and sisters imprisoned in Ferrada Prison, Italy.

To all the prisoners who were filled with anger and faced off against the police during the recent revolt in October.

Warmly greeting the initiative of the International Week for Anarchist Prisoners, which is being carried out from the 25th to the 30th of August, I say goodbye for now.

Koukaki Fell Heavy on Them