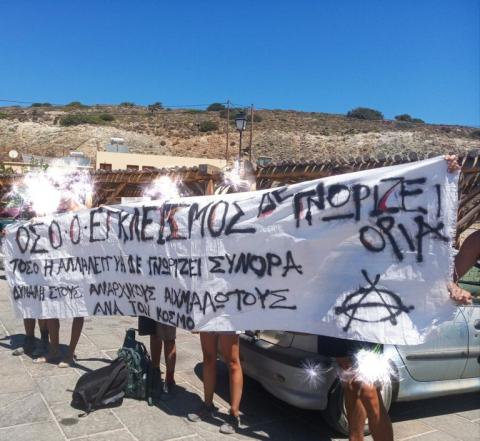 As a response to the call for International Week of Solidarity with anarchist prisoners (23-30 August -from the 23rd of August, the day of execution of Sacco and Vanzetti), we took action in Gavdos island -the so-called “southern-most point of Europe”.

We don’t lay back during our holiday, while anarchists all around the world are captive in the cells of democratic states. We break the isolation by activating cells of direct action (through comrade initiatives), even in the most out-of-the-way places.We decided to express our solidarity in action through a series of interventions:

i. On Friday 22nd of August, we painted graffiti slogans on several walls with context regarding solidarity with the anarchist prisoners all over the world as well as with the evacuated squat of Terra Incognita in Thessaloniki (evacuated on the 17th of August). We also filled with (anarchist) slogans the town hall, chosen as an institutional landmark/symbol.

ii. Because of the history of Gavdos island as a place of exile, we decided to paint graffiti slogans on the walls of the dwellings where the exiles used to live. The tenants of the building, capitalising on its history, transformed it to a small business for the last 6 years, under the name “The House of the Exiles”, renting rooms and spots for tent camping and selling alcohol and food. In that way, they exploit the historical character of the dwellings and gain profits through history and the exiles’ pain. During the graffiti action, the business owners appeared declaring that “the building is private property” and so we had no right to be there, that “there is an old contract with the exiles” for the use of the building, whilst also threatening that they would call the cops.

They also hypocritically said that they “saved” the place of historical memory, through its commercial use and exploitation. After several assertive responses from our side, we left united altogether. The historical places of exiles and prisoners, even if we don’t share the same ideological point of view, cannot be supported through capitalization and commercialisation, despite the fact that this alibi is being sold to the alternative consumers. We all are exiles in a world of prisons.

iii. On the next day, Saturday 23rd of August, several comrades intervened at the island port before the boat departure, unfurling a banner “As long as confinement has no boundaries, so long solidarity has no borders”, and chanting slogans, The passion for freedom is bigger than all the cells of the world, Neither political (prisoners) neither criminal (prisoners)/ dynamite and fire for every prison, Freedom-freedom for all (internees) in the prison cells, Solidarity is people’s weapon/ war against the bosses’ war, People/nothing are meat for slaughter/ smash the nations and the armies, We are together with migrants/ dynamite and fire for every prison, Neither in Gavdos, nor anywhere/ kill fascists in every island, Antispeciestic consiensce, denial and violence/ smash patriarchy, Death for Greece, long live us/ family and mother country, go to hell, 10 100 1000 squats against a world of organised decay.

The gathered comrades left without a problem.

SOLIDARITY TO ANARCHIST CAPTIVES BEHIND BARS ALL OVER THE WORLD