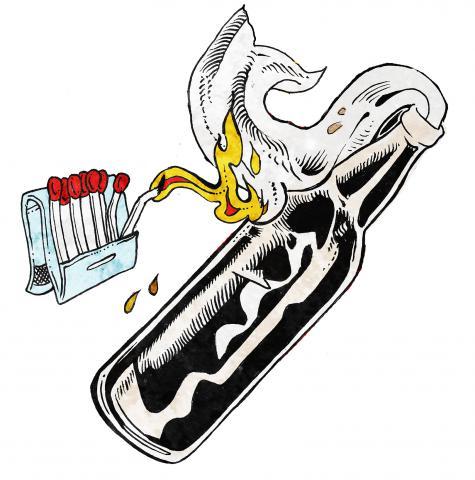 Solidarity with our comrades in prison is something essential. And even if it is a constant practice, day after day, we like the idea of an international campaign to remember them. A solidarity that should be more than words, more than paint and testimonies.
In the night between 24 and 25 August, in the Passage de Lagny, in Paris, we set fire to a van of the Eiffage company infamous for building prisons (and the huge open air prison: these increasingly guarded and inhuman cities).

This small action is just a drop in the ocean compared to such a world of authority and exploitation. It changes little of its functioning and will quickly be forgotten. But, as well as the fact that Eiffage is struck regularly, in Paris or elsewhere, what counts for us is the decision not to accept this state of affairs, to act with our own means, to tell ourselves and others that it is possible. If we struggle, it is for dignity.

Solidarity with the anarchists locked up in the prisons of the various States of the world!

A special thought for Monica and Francisco, in Chile.

Fire to the prisons, to those under construction, to those who make them exist.

In the night between the 26th and 27th August, we set fire to a utility vehicle belonging to the Vinci company, prison constructors, in rue Ramus, in the twentieth district of Paris.

Vinci, like all businesses, has the sole aim of accumulating profits and in this case we are talking about billions of euros (Vinci is the second biggest construction and public concessions company in the world). They do this by destroying nature, participating in tomorrow’s disasters (such as with the construction of the nuclear waste plant of Bure), building cages. So let’s try to reduce their profits a little! And fire is a good way.

We want to take the chance to send our warm greetings to Gabriel Pombo Da Silva, on the occasion of the international week of struggle in solidarity with imprisoned anarchists.