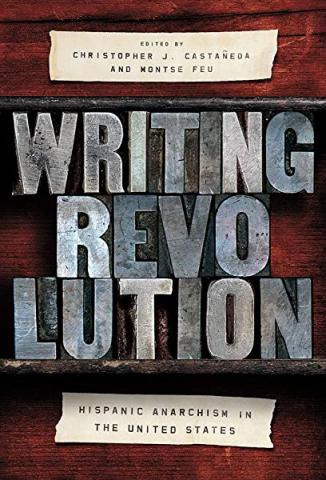 Book Review: Hispanic Anarchism in the United States
August 27, 2020
By Morris Brodie
via The Volunteer

This new collection edited by Christopher J. Castañeda and Montse Feu fills a substantial historiographical gap in the English language on Hispanic anarchism in the United States. Several books on the American anarchist movement have appeared in recent years, but none have devoted so much space to this particular diasporic radical community. The book follows the trajectory of the movement from its earliest days in the 1880s through to the late twentieth century, interspersing the lives of notable figures with important national and worldwide events such as the Haymarket Affair, the Cuba Libre movement and the Spanish Civil War. The focus is on the importance of Spanish-language periodicals—and individuals associated with them—in forming and sustaining the transnational networks that have been so important to anarchism since the late nineteenth century.

Readers of The Volunteer will be drawn to the book’s final part on the Spanish Civil War and exile, but to overlook the previous sections would be a mistake. The collection is sprawling in its ambition, with chapters ranging from discussions of early Spanish Republicanism and important but largely forgotten figures to analyses of individual newspapers and magazines. Despite this conglomeration of topics, the book flows easily, thanks in part to its chronological and thematic organization. Several chapters expand on figures introduced earlier in the book, highlighting the role of individuals in maintaining the movement. Although its subtitle suggests a focus on the United States, the book is far broader in its geographical remit, taking the Spanish language as its starting point. The result is a dismantling of the borders that sometimes frame radical history. In fact, one of the book’s strengths is how it places the experience of Spanish-speaking anarchists within the wider American and global anarchist movement.

An interesting theme that emerges from the collection is how often Spanish anarchists living in Spain idealized the United States and its supposedly liberal democratic system. Immigrant Spanish anarchists were quick to correct this rose-tinted view of the young republic. Working conditions in the US were not noticeably better than those back on the peninsula, as shown by Kirk Shaffer’s contribution on Anglo racism against activists in the cigar factories of Tampa. There are surprises, too. One of my favorite chapters is Jesse Cohn’s account of a ‘global anarchist network’ in the heart of the Rust Belt in Steubenville, Ohio. This discovery challenges our perceived notions of Hispanic anarchism as primarily a coastal (East, West and Gulf) phenomenon.

Castañeda has two chapters in the collection, both of which focus on anarchists’ attitudes to developments outside the US: the Cuba Libre movement of the 1890s and the Mexican Revolution. The former is an illuminating account of the tensions between Cuban-born (creole) and Spanish-born (peninsular) activists in New York City. Some Cuban nationalists accused peninsular anarchists of prioritizing their own wages over independence, a claim that José Cayetamo Campos (a Cuban-born anarchist and editor of El Despertar) rejected outright. The chapter raises interesting questions about the relationship between anarchism, nationalism and anti-imperialism.

Co-editor Feu has an equally thought-provoking contribution examining the Spanish anti-fascist exile newspaper España Libre and its anarchist editor Jesús González Malo. Feu’s discussion of ‘reformist’ anarchism after defeat in Spain is a counterpoint to those representations of anarchism as a sectarian, ultra-revolutionary sect. The chapter on the Spanish Civil War itself is a well-argued piece by Michel Otayek that looks at the propaganda networks between Spain and the US during the conflict. Information exchanges between the Confederación Nacional del Trabajo (CNT) in Spain and those across the Atlantic were fraught with difficulty, although I think Otayek is slightly too harsh in his treatment of the German Augustin Souchy, the head of foreign anarchist propaganda in Barcelona. The United Libertarian Organizations (ULO), the hub of US anarchist solidarity on the East Coast, initially sent its request for newspapers to the wrong address in Barcelona, which is symptomatic of a degree of disorganization on both sides of the pond. Images of some of the propaganda produced by the CNT for consumption overseas included in the chapter are a particularly welcome addition.

The final chapter is an extended eulogy of Federico Arcos, a veteran of the Libertarian Youth (FIJL) during the civil war who moved to Canada in 1952. He later became a much-loved figure for the Detroit anarchist movement across the river from his adopted hometown of Windsor in Ontario. One memorable passage from this chapter by David Watson is when he describes Arcos’ desire to move forward from the civil war, unlike some of his comrades “whose watches seemed to have stopped when they crossed the Ebro River.” The anarchist movement spent decades rhetorically refighting the battles of the civil war, which served to ossify the conflict as an almost mythical ‘last stand’ between anarchism and the militarized capitalist state. This book shows that Hispanic anarchism in the US was far more than simply the civil war and its fallout—it was an enduring network of activists from an expansive geographical range, one that contributed an important, if perhaps forgotten, part to American working-class life and culture.

Morris Brodie is a historian at Queen’s University Belfast. His new book Transatlantic Anarchism during the Spanish Civil War and Revolution, 1936-1939: Fury Over Spain was recently published by Routledge.