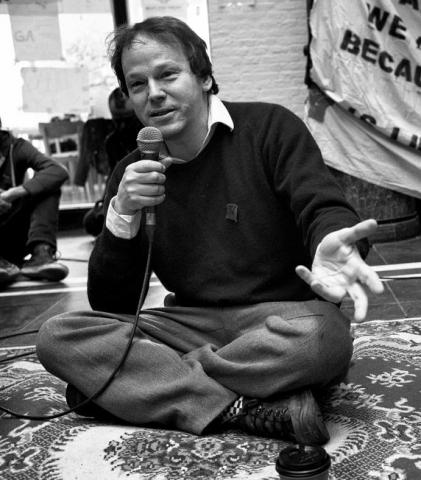 David Graeber Dead: Anthropologist & Anti-Capitalist Thinker Behind ‘We Are the 99%’ Slogan Dies at 59

David Graeber, the anthropologist who was influential in the Occupy Wall Street movement and is believed to have coined the phrase, “We are the 99%,” has died at 59.

Graeber’s death was confirmed on the morning of September 3 by his wife, Nika Dubrovsky. Dubrovsky tweeted, “Yesterday the best person in a world, my husband and my friend. @davidgraeber died in a hospital in Venice.”

Graeber was the professor of anthropology at the London School of Economics and wrote the book Debt: The First 5000 Years which was published in 2011. His other books include 2015’s Utopia Rules and 2018’s Bullshit Jobs: A Theory. In addition to his involvement with Occupy Wall Street, Graeber was also known for his activism with the Global Justice Movement. On his Twitter page, Graeber described himself as “an anthropologist, sometimes I occupy things & such. I see anarchism as something you do not an identity so don’t call me the anarchist anthropologist.”

Here’s what you need to know:

1. Graeber Said on August 28 That He Was ‘Under the Weather’ But Was Starting to Feel Better

On August 28, Graeber said in a YouTube video that he had been feeling “a little under the weather” but was beginning to feel better. The same day, Graeber tweeted that he had “not been in tip-top shape.”

On August 31, Dubrovsky tweeted a photo from Venice with the caption, “Venice. Dark, wet and chilly.” Graeber was active on Twitter until the day before his death.

According to Graeber’s LinkedIn page, he is a graduate of SUNY Purchase and attained a PhD in anthropology from the University of Chicago in 1996. Graeber’s first teaching job was as an assistant professor of anthropology at Haverford College. In 1998, Graeber began working as an associate professor at Yale University. Graeber remained in that role until June 2007. Since September 2007, Graeber had been teaching at the University of London’s School of Economics. A profile on SUNY Purchase’s website referred to Graeber as “one of the most brilliant minds of his generation.”

2. Graeber Suspected His Teaching Contract at Yale Was Discontinued Because of His ‘Radical Actions’

A 2011 Rolling Stone article attributed the phrase, “We are the 99%,” to Graeber in a piece on the Occupy Wall Street movement. The phrase had been mentioned by economist Josep Stiglitz’s in a May 2011 article for Vanity Fair. The Rolling Stone article mentioned that Graeber suspected his teaching job at Yale was discontinued because of his “radical actions.” The article also said that Graeber decamped to Austin, Texas, four days after the physical protest began in Zuccotti Park in New York City.

3. Graeber Previously Described Himself as an ‘Eternal Optimist’

In 2018, Graeber told The New Statesman that he was born in New York to self-educated parents. His father, Kenneth, fought on the side of the Republicans in the Spanish Civil War, Graeber said. Later, Graeber’s father worked as a plate stripper and his mother, Ruth, worked as a garment worker. Graeber said his mother was active in the International Ladies’ Garment Workers’ Union. Graeber said in the interview that he was raised in an environment that embraced anarchism.

The interview concluded with Graeber saying that he thought of himself as an “eternal optimist.” Graeber added that he felt that in 50 years a new system would be in place that was not capitalist. Graeber warned, “It could be something even worse. It’s therefore imperative that we end this taboo around trying to figure out something that might be better. If we don’t get something better, it will be something worse – it won’t be the same.”

Graeber married Nika Dubrovsky in April 2019. On April 25, Dubrovsky tweeted a photo of the couple with the caption, “Going for a wedding.” Graeber retweeted the photo and added, “I’ve never been married before.” He also said, “I have never been more moved than that someone who actually knows me would want to be with me forever.”

Graeber has tweeted in the past that his wife is a native of St. Petersburg, Russia, and grew up in the Soviet-era. Graeber tweeted that his wife struggled to watch the United Kingdom’s public broadcaster the BBC because it reminded her too much of the Soviet propaganda of her youth. In 2019, the couple founded Yes Women, an art group that sought justice for ostracized women in the former East Germany.

5. Graeber Is Being Mourned on Social Media by His Peers as One of the Greatest Minds of His Generation

As news spread of Graeber’s death, his peers as well as his fans, took to Twitter to mourn him. Here are some of the most poignant messages of remembrance:

“David Graeber was truly a friend of the women’s struggle and the revolution in Rojava. The world has lost his presence, but his light lives on in every person who struggles for freedom. Rest in peace, comrade #davidgraeber pic.twitter.com/KVhs0WnaHs”

“We have just learnt with great grief the death of @davidgraeber yesterday.

David, famous anthropologist scholar, was a great friend and supporter of the Kurdish Freedom Movement; traveling to Rojava, speaking about the revolution and participating to many demos.

“So terribly sad to hear about @davidgraeber’s passing. People will be sharing a lot of his brilliant public intellectual work, but Graeber was an outstanding, unmatched theorist in anthropology. His ability to link the two forms of writing was awe inspiring.”

“Oh David! @davidgraeber. They say only the good die young, but why did you have to be one of them?

There’s even more bullshit in the world now that you are no longer with us.

It was a pleasure to know you, and it is a tragedy to say goodbye.”