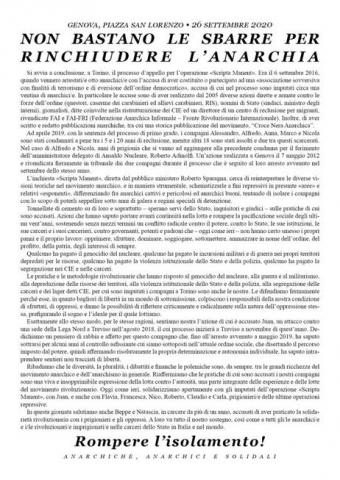 via Act For Freedom Now!

Gathering against repression in solidarity with the anarchists arrested following operation Scripta Manent.

ANARCHY CAN’T BE LOCKED UP BEHIND BARS

The «Scripta Manent» appeal trial in Turin is coming to an end. It was on 6th September 2016 that eight anarchists were arrested and accused of having formed or participated in a «subversive association with aims of terrorism and subversion of the democratic order», a charge that about twenty anarchists are accused of in the trial. In particular the accusations are of carrying out, from 2005, several direct and armed actions against the police (police chiefs, carabinieri barracks, carabinieri training centres and RIS), men of State (mayors, the minister of the interior), journalists, companies involved in the restructuring of CIEs and the director of a detention centre for migrants, actions that were claimed FAI and FAI-FRI (Informal Anarchist Federation-International Revolutionary Front). In addition that of having written and edited anarchist publications including a historic publication of the movement, “Croce Nera Anarchica” [Anarchist Black Cross].

In April 2019, with the first-grade trial sentence, the comrades Alessandro, Alfredo, Anna, Marco and Nicola were given sentences ranging from 5 to 20 years of imprisonment, whereas another 18 were acquitted and two were released. In Alfredo and Nicola’s case, years of imprisonment were added to a previous sentence for the kneecapping of the managing director of Ansaldo Nucleare, Roberto Adinolfi. This action was carried out on 7th May 2012 in Genoa and proudly claimed by the two comrades in court during the trial following their arrest in September of the same year.

The «Scripta Manent» investigation, led by public prosecutor Roberto Sparagna, has attempted to reinterpret the different theoretical views of the anarchist movement and schematize them into alleged «areas» and relative «members» instrumentally, for repressive purposes, differentiating between bad dangerous anarchists and good anarchists, trying to isolate the comrades with the aim of burying them under years of jail and special detentive regimes. Under tons of cement, they and above all – so the State’s servants, inquisitors and judges, hope – the practices they are accused of. Actions which were able to carry forward the continuity of the struggle and break the social pacification of the last twenty years, maintaining in no uncertain terms a radical conflict against power, against the State, its institutions, its jails and its jailers, against rulers, the powerful and the bosses who – now as in the past – certainly haven’t given up their roles and their work: to oppress, to exploit, to dominate, to subjugate, to kill in the name of order, profit, the homeland, the interests of all time.

The revolutionary practices and methodologies that have responded to the genocide of nuclear power, to war and militarism, to the plundering of resources in territories, to the State and the police’s institutional violence, to the segregation in jails and concentration camps known as CIEs, which our comrades in Turin are on trial for, are also ours. We staunchly defend them because, as glimpses of freedom in a world of submission, they strike those responsible for our condition as exploited, oppressed, and give the possibility to critically and radically reflect on the nature of oppression itself, prefiguring the dream and the ideal we are struggling for.

Precisely the same way, for the same reasons, as we feel as ours the action that Juan is accused of, an attack carried out in August 2018 on the Northern League premises in Treviso. His trial is due to start in November this year in Treviso. We think for a moment with love and rage of this comrade who, for a number of years before his arrest in May 2019, was able to escape the asphyxiating control that we endure under the present social order. By deserting the path imposed by power and resolutely affirming his determination and individual autonomy, he was able to embark on unmapped paths of freedom.

We repeat that diversities, pluralities, discussions and even polemics have always been part of the great wealth of the anarchist movement and of anarchism in general. We reaffirm that the practices our comrades are accused of are a living and irrepressible expression of the struggle against authority, an integral part of the experiences and struggles of the revolutionary movement. Today as in the past we stand openly in solidarity with those on trial for operation «Scripta Manent», with Juan and also with Flavia, Francesca, Nico, Roberto, Claudio and Carla, prisoners of the latest repressive operations.

Today we also send greetings to Beppe and Natascia, in jail for over a year, accused of having carried out revolutionary solidarity with prisoners and the oppressed. All our support goes to them, as to all the anarchists and revolutionaries imprisoned in the jails of the State in Italy and the world.

INITIATIVES IN TURIN AND ALESSANDRIA

We are going to mention other initiatives due to take place this month in the context of the mobilization in solidarity with those on trial for «Scripta Manent», which will animate several cities.

Monday 7th, Tuesday 8th and Wednesday 9th September: solidarity presence in the bunker courtroom of the Le Vallette prison in Turin on 7th-9th September, the days when the public prosecutors is to give his statements, because prosecutors’ future strategy concerning anarchists will be decided in that courtroom.

Thursday 24th September from 9am: solidarity presence inside and outside the bunker courtroom of the Le Vallette prison in Turin.

Saturday 26th September at 10am: solidarity presence in Piazza Borgo Dora in Turin.

Sunday 27th September from 3pm: gathering outside the «S. Michele» prison in Alessandria (road to Casale 50/A).

In solidarity with those on the «Scripta Manent» trial.

Against the alienation of trials in videoconference and the measures taken to prevent any solidarity presence in the court from taking place. Against all forms of reclusion. Not forgetting last March’s protests and revolts in the prisons, repressed by the State with beatings and mass transfers and 13 dead.

Let’s claim it. To struggle is right and necessary

(translated into English by Act For Freedom Now!)