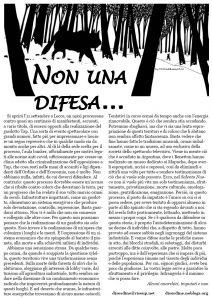 via Act for Freedom Now!

Lecce, Italy : NOT A DEFENCE…

On 11th September a maxi-trial will begin in Lecce against almost a hundred demonstrators accused of having opposed the realization of the TAP gas pipeline in various ways. A sort of spectacular event with big numbers set up mainly to impress and leave a sign of repression that can also be a warning to others in some way. Besides the place, a bunker courtroom, chosen for the trial, officially for reasons linked to anti-Covid regulations, unofficially to create an atmosphere suitable for the criminalization of the TAP opposition, the obstinate and law-dependent clerks of Order and the Economy do not have much in their hands. In fact, we have nothing to defend. On the contrary: this trial should be an accusation that rebounds against those who are devastating the earth in the name of a progress that has been revealing its rotten face for centuries. Infrastructures with a strong impact such as a gas pipeline are feeding an energy-consuming system that only produces devastation, control, repression. It’s enough to just take a look around. There is not one thing that is not connected and linked to everything else. That is why we can’t see the realization of a gas pipeline as that alone. On the contrary, this is an operation that is colonizing places and minds. It is the expression of an economic system that is pushing the planet to the brink, to the slavery and death of millions of individuals.

We have a strange sensation. For a while now, since the Xylella affair broke out, this territory has been living an unprecedented transformation. The interests of various lobbies, from tourism to industrial agriculture, have been hovering over the death of the forest of olive trees that once inhabited it. Everything seems to be going in the direction of a radical economic change which will impoverish the nature of these places profoundly.

And the energy infrastructures will certainly come up against fewer obstacles in the advancing desert. Similar attempts have also been going on for some time with renewable energy. This is what seems to be happening. We might be wrong, but the fact that there is a slow expropriation of these lands and those who live on them doesn’t seem to be science fiction at all. It is sufficient to look at what has happened to the musical traditions, now embalmed as if in a museum for the exclusive use of the society of the TV spectacle. What happened in Argentina comes to mind, where after expropriating, killing and repressing the Mapuche, Benetton created a museum dedicated to them to eliminate and silence them once and for all, giving a testimony of something they want to be only the past. There, in the New Salento they no longer want life but only testimony, exploitation, privatization, cultural death, homologation, gentrification, emigration.

So, in this trial, the place of the accused for having tried to oppose, at least in part, the barbed wire that is going up in front of us, is the only place to be. And to have done so practically, struggling, putting one’s body in the midst. If there is something to defend in this story, it is precisely the self-determination of a few dozen individuals who in spite of everything tried to be sand in the cogs of the industrial system. And the practices carried out should also be defended, from road blocks to sabotage, from disruption of the companies involved, to stones. Very little unfortunately, but it is from experience that one learns best, because experience remains in individuals’ and populations’ lives. So, your honours, you have little to judge. Your law serves to guarantee exploitation and privilege. Breaking it is the least that can be done.

Some anarchists, accused and not