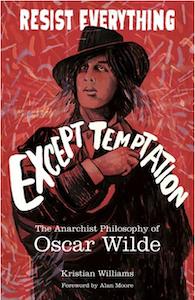 via The Final Straw Radio

The Intertwined Histories of Queerness and Anarchism; Guest Interview with Kristian Williams about his new book on Oscar Wilde

This week we are pleased to present a guest interview with author Kristian Williams about his new book Resist Everything Except Temptation: The Anarchist Philosophy of Oscar Wilde which was released in June 2020 from AK Press.

I found this interview extremely illuminating, perhaps like many other people who might not have strong ties to either academia or popular education models of learning, I had sort of written Oscar Wilde off as this kind of white dead rich guy who carried little to no relevance apart from a model of queerness that we could look back on. This interview very much proved that this isn’t the case, and that he and the circumstances around him very much influence how we as queers and as anarchists can sense historical threads that pull on our lives very tangibly today. Thanks a million to Scott for researching and conducting this interview!

You can learn more about the author, Kristian Williams, who is most known for his book Our Enemies in Blue, which is a critical history of American policing and police, at his website kristianwilliams.com.

One announcement before we begin from our comrades at the Charlotte Uprising, Charlotte Jail Support has been getting extremely targeted harassment for some months from CMPD and the sheriff’s department. In times of rebellion or revolt, it is the support infrastructures that are often the most vulnerable to repression and violence. All of their supplies have either been seized or destroyed by the police, if you would like to support them re upping their much needed materials, you can Venmoing them @Ashwilliamsclt or Cash App $houseofkanautica.

Music for this episode: