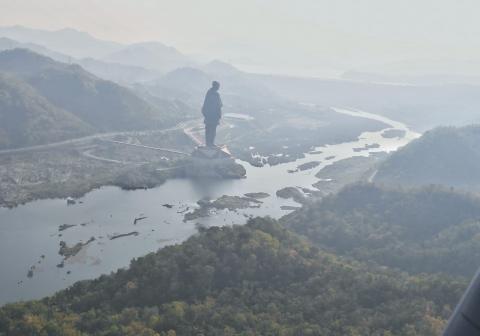 Can they be useful to anarchists?

The statue is an old device, likely as old as society. From folklore
artifacts to fallen heroes to deities, they’ll always be carrying their
load of meaning that brings a narrative of sorts. And they are pervasive,
and prevailing through time and context, and across distinct social
arrangements.

Erected on the public place, they went beyond their archaic role in deity
worship, to commemorating long past events and deeds across generations,
in a mythological social pattern that asserts the ideas they represent
across and against “time”, 24/7, without anyone’s direct effort at
proselytism. Statues are preaching or storytelling by themselves. They can
“talk”, and “act” in a given social theater play. Even as most people
aren’t listening to their murmurs, even caring about it, they’re still
standing around, behind, beneath, and above all, beyond their lives.

Especially with the advent of absolutism and then the modern times,
statues just kept multiplying in a colonialistic world where urban
development is little more than a facade for the native world it
destroyed, the statues and other landmarks act merely as a feedback loop
of self-justification of the settler’s own presence. So it can be argued
that statues always been at the very least accessories for myth-building.
Even for the few instances they did not initially serve that purpose,
they’re just a step away from a myth to take shape around them.

With the neo-Confederate movement erecting monuments to past racist
murdering scum, and with their taking down by antiracists, we could
contemplate their unavoidable social purpose as signifiers of our place in
history, and in the world, as a major marker in a battle for a dominant
narrative. In a way, while it may feel insane to be attacking lifeless
statues, it appears equally as necessary “cure” for the insanity of an
opposite faction enforcing their own views upon the rest of the people. As
these statues were also given an “eternal” life of domination. In so, such
defacing or taking down statues becomes an inherently anarchistic course
of action.

So, to anarchists, the statue might seem (perhaps rightfully) like an
absolute no-go. It is, after all, an ages-old practice of materializing
authoritarianism, cultism, sheepish behaviors we despise and would rather
reject. It’s been a component in the “cult of carrion”, the worship of
glorified images of dead people, of their myth, and as such they bring us
back to an archaic pattern of sock-putting with the dead, and give them a
central place in the world of today as it would have not evolved, in a
same-old magik ritual aimed at resurrecting the past, to lock us into it.

If the world of humans, their society, is only driven by narratives, then
shouldn’t we, as anarchists, also be pushing for our own figures to become
immortalized in… well, not necessarily statues on the public place, but
some means to make anarchist fighters, thinkers. creators, artists, poets,
musicians, or just even randos, be immortalized for what they did or
experienced?

It is obvious that we’ve been already doing that, in a way, even if
unconsciously. Why else dedicating/claiming attacks in the name of some
fallen fighters the only conceivable way? Why else putting stuff on the
internet if not for the people abroad, and the generations to come to be
inspired by those same symbols? If we’ll avoid statues, then what will be
the other ways?

How do you think anarchists, to you, should symbolize their ideas and
sentiment beyond time, and across generations, in such non-verbal and
passive means, as a serious antagonist to the State’s persistence through
time?

(Thanks to Fauvenoir for sharing via email, our address is: thecollective [at] anarchistnews [dot] org)

⁠The moral force of violence and the limits of reform

“After 10 Years! Lambros Fountas Lives in the Heart of Every Fighter”