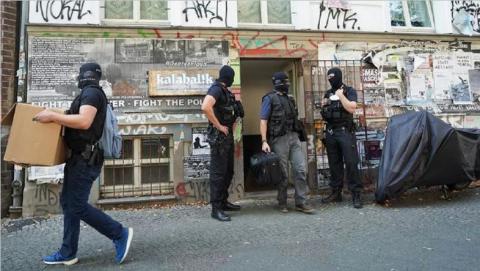 via Indymedia DE translated by Enough is Enough!

Police raids in #Athens and #Berlin: And again they create a criminal organization

Berlin. Athens. September 16. 2020. The searches today, which included our anarchist library, are nothing new. But this time the authorities are stepping up their efforts. Five people are affected, who are accused of having founded a special, conspiratorial and criminal association or of being members of it. For this reason, the Federal Prosecutor’s Office is investigating under paragraph 129 and the BKA visited the people concerned at home, sometimes with pulled guns.

This is a wild construct of fantasized dangerousness and other absurd investigation procedures. In the context of one of these procedures, which fizzled out in the air, our library was searched before in 2018. At that time, it was about calls for wanted persons to search for those responsible for the G20 summit in Hamburg.

During the searches at that time the cops were looking for people wearing reggae hats. This time they focused their searches on black clothes, wind jackets and hoodies.

In their enthusiasm, the BKA confiscated the 2018 data carriers that had been returned by the LKA Berlin and were still inside the LKA’s evidence bags. We suspect that there may have been a competence conflict between Goebel of the LKA Berlin and Dr. Sturm of the Federal Prosecutor’s Office.

In all searches, as always, storage media, computers, cell phones, black clothes and other items were confiscated. Interesting here is the special interest in cell phones, which were brought separately for evaluation before the searches ended.

In some cases the BKA cops spent 7 hours in the apartments during the searches, for Kalabalik 5 hours were sufficient. In Athens, the BKA searched 2 apartments in cooperation with Greek anti-terror cops. There, 5 persons were taken to GADA (main police station). 3 of them are still in custody and will be brought to court tomorrow for pepper spray.

Berlin is not the only city currently affected by repression. We belong to the continuing trend of investigations against radical leftist structures in the FRG. Whether Hamburg, Frankfurt or Leipzig, only our solidarity can be stronger than their repression.

There will be a call for a solidarity demo early Friday evening!

As soon as there is a better overview of this procedure and new information is available, we will inform you. Greetings and power to those affected!

Against the Quarantine of Passions, the Social Epidemic