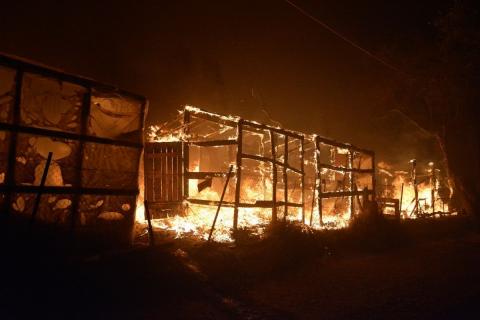 When a prison burns down, those of us who have experienced, even for a moment, the condition of imprisonment, can only shudder with delight.

Regardless of whether a new one will be built after its demolition, and regardless of whether the empty cells will be refilled after the escape of some prisoners, the fact of the escape can only fill us with joy. After all, the struggle for the abolition of every prison, goes through the struggle for individual and social liberation, right here and now.

It was Tuesday night on 8 of September 2020, when one of the most hated prisons in Europe burst into flames. It was not the first time that some people tried to burn down the concentration camp of Moria. Almost on a daily basis, smaller fires were braking out, as a result of indignation or the flammable conditions in which people were living. This time, however, it was not the same. People’s souls were drier than ever, and their temporary possessions looked more like firelighters than goods. During the same day clashes were spread around once again, while the police-doctors arrived to impose the complete blockade of the entire Camp and the isolation of population groups within it. It was some days before when the state decided to build a wall that would enclose all the slums around the Moria camp. It was some days before when UNHCR decide to reduce their small allowance. It was some months before that restriction and abandonment were imposed in the camp in the name of Public Health. It’s been years now that there are no prospects at all. All these and much more forced many of the prisoners to get armed with stones and stand infront of the fire trucks, ready to make sure that the flames would embrace their whole hell. Room-by-room they opened the bureaucratic structures of Procrustes and burned, again and again, and the next day, and the next, until they made sure that they would never have to come back again.

Those who are afraid of change will do anything in order to justify the previous situation. All of us, the white Europeans who wake up to go to work, trapped in a daily routine of relative abundance and anticipated emotions, fill disturbed by the violent effectiveness of fire. We are disturbed by how easily and rapidly changes what seems so far unshakable. People’s vested interests named a bunch of demons as the culprits of the fire. Turkish agents, dark governmentals, jihadists, local fascists, foreign fascists, paraded through the pettit-bourgeois fantasies in an effort to justify inaction and intermediation. It is this dark fabric that we put on our own eyes so as not to face the reality, not to be confronted with taking a position. No matter which devil put on the fire, this act is not separated from the laughter of the children, the yawns of the crowd that ecstatically said goodbye to their prison. This act is not unrelated to the stones which are thrown even now, a week later, towards the torturers. This act is not unrelated to the refusal of people to enter into a new concentration camp, to their refusal to feed, to their refusal to accept the charity of the “whites”.

One week later, 13,000 people are restricted in a section of the road that leads to the port. Night and day police and military planes land hundreds of special forces with all kinds of equipment. Ships unload water canon trucks and other special vehicles. Firefighting planes are constantly flying to put out the repeated fires set by the insurgents either to burn again what has been left, either to sabotage the efforts to build a new prison, or to protect themselves from the hundreds of tear gases fired by the police. At the same time all kinds of drones and helicopters are flying in the sky of Mytilene monitoring their movements and organising the repression that is expected to peak hour by hour.

Certainly not all of these people are united, nor we can call them all rebels. Their racial and internal conflicts were, after all, something systematically cultivated in the miserable conditions in which they lived. However, we can see a critical revolting crowd of people who do not accept to take a step back. They gamble their future in the fire, they build stone by stone their freedom. The same people engage in immediate action practices, such as aggressively abstaining from food, aggressively rejecting humanitarian aid, or aggressively refusing to integrate themselves into the new narrative of power. Considering the worries of some “white” people about the food and the comforts of the insurgents, it is enough to take a look at their slogans: “We do not want a new camp, we want Freedom”, “We do not want food, we want Freedom”.

Considering the above, it is important to observe the impasses that was triggered by the uprising among people in solidarity and locals. The efforts for a humanitarian management of the uprising came to replace the initial numbness that overwhelmed the people in solidarity. The first thoughts were regarding food, clothes, accommodation, security from fascists, etc. This approach can be described as out of date, if we consider that thousands of portions of food were trashed due to the refusal of the insurgents to return to the previous normalcy of humanitarian management. Five years now, a multimillion-dollar business has been enabled on the island, through which various systemic and non-systemic actors get rich, and which undertake to satisfy the basic needs of the trapped. Even worse, professional humanitarian organizations, worried about the situation that threatens their investments, they are proposing a return to the past through active participation in the reconstruction of a new camp in cooperation with the army and police. Combining all this we are in front of the timeless impasse of solidarity, when it flirts with charity and the logic of victimization and does not unite with the struggle of the insurgents, strengthening them in ways that actively promote their demands.

On the other hand, a group of local people having as a constant demand the closing of Moria camp, they set up a block, blocking the machines that arrived to clean the burned area, so that it could continue to operate. They also show their aggression to the Minister of Immigration, whom they did not allow him to approach. The struggle of the locals can also be seen through a prism of abandonment, deception, personal ambitions and impasses. Experiencing the human trafficking that the global interests are openly develop, and infront of the huge flow of state’s armaments, they have gradually moved through the impasse of humanitarian management into the racist illness. They are left to be guided by politicians with hidden agendas and ambitious leaders who swim in the spoon of interest, and soon the results will be exactly the opposite than people are expected.

Those of us who know Greek society over a period of decades can not be surprised by its apparent conservatism. Racism, nationalism, patriarchy and intermediation are deeply rooted at the Greek society in general. Even if some bourgeois “good manners” were imposed during a small period of a temporary abundance in a part of the society, distancing and indifference was nothing more than an artificial concealment of the above. In the face of the current situation, it is hypocritical to talk about 10-100 fascists or the performance of a political party. The whole “democratic arc” in Lesvos, in front of the great celebration of the burning Moria, stood either crying or speaking straight from the cesspool. A cesspool that the media does not miss the opportunity to inflate at the most distant brain cells. The information is managed on the terms of the national threat, charged with those of the health bomb. The special police and army forces, which prevent the migrants from approaching the port, have been transformed this time, in contrast to what happened a few months ago, to their protectors from the infected zombies that the Turkish regime send. But we all are responsible for this image in the background. When we didn’t see the cop’s uniform under that of the doctor. When we swallowed raw and meaningless humanism. When our individual responsibility became a cause of alienation. When scientificity muted concepts such as self-determination and self-management. When we avoided to struggle against the dance of millions that aimed to reproduce confinement and repression. When we avoided to talk so as not to identify with those we called fascists. When we appeased the racism of society by accusing 10-100 extreme right-wingers. When we consented to the medical clergy turning a blind eye to the hypocritical management that took place in the concentration camps.

The only solution, as it is uttered by the insurgents, is non-solution. And we must promote it with all our means and power. As states and humanitarian organizations try to find ways to manage this deplorable situation, the only role we can play is to sabotage them. Non-solution is confronted with the concept of intermediation. Because the management, if it is done by a central system of power, can only divide, imprison, isolate.

Once again we need to think about the meaning of solidarity. What kind of solidarity do the insurgents expect from us? In a struggle in which insurgents offer their bodies and sacrifice material goods to the flames, solidarity is not a plate of food, a tent and a cop. In the face of the great fire that burned Moria, small sparks are the only way to communicate with the insurgents. Our hearts were warmed by the great fires that leveled the hell of Moria. As always in such moments the monsters reveal their intentions in the clearest way. Let their weaknesses become our target until the final collapse of any solution. Until we build infinitely fragile societies of equality and solidarity. Until the leveling of each prison, inside or outside.

Tags:
FTTP
fire
fire to the prisons
Moria
Greece
refugees
refugee camps
migration
til all are free
no borders
no cages

Food Not Bombs: What to Know About the Free Meal Collective