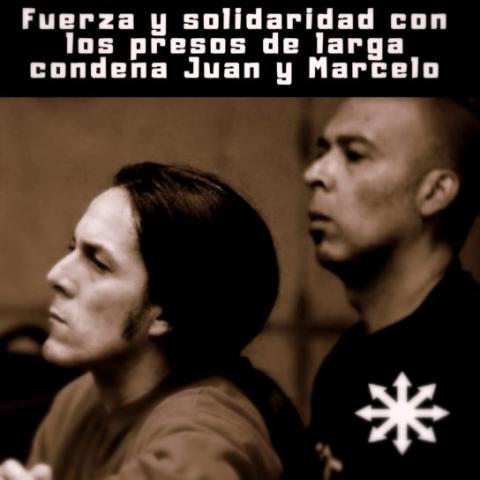 Prisons are the structures that seek to inhibit the act of any person who goes outside the proper conduct of the State, punishment, imposition and discipline is the regime that any captive has to live, seeking to annul their actions, ideas and convictions. These actions can be “criminal” like those who challenge the order under a revolutionary political option.

That is why today, through these words, we want to support some colleagues who resist with dignity in the High Security Prison in Santiago de Chile, we’re referring to Juan Aliste Vega and Marcelo Villarroel Sepúlveda, autonomous and libertarian subversive prisoners.
These comrades are currently serving a sentence for some bank robberies, one of which culminated in the death of a cop on October 18, 2007.

In that last event that took place on 10/18/2007 in the center of Santiago, the cops quickly accuse them as the perpetrators through the press, bringing up their history of combat against the dictatorship of the tyrant Augusto Pinochet, since Juan and Marcelo had belonged to the urban guerrilla of MAPU-LAUTARO, an organization that fought in those times in Chile. Both spent more than 10 years in prison for subversive actions that had great repercussions, so that, for the State, politicians and police intelligence, Juan and Marcelo are not strangers.

The comrades went into hiding and were arrested in Argentine territory, Marcelo on March 15, 2008 in San Martín de los Andes (along with another comrade who is already out of prison) and was convicted of carrying a weapon of war, he was imprisoned for some time in the U11 of Neuquén, maintaining a fight for political refuge under an extensive hunger strike, he was finally expelled to Chile. While Juan was arrested on July 10, 2010 at the Retiro bus terminal in Buenos Aires and was immediately expelled to Chile.

Juan was sentenced to 42 years in prison. While Marcelo to 14 years in prison, but he currently cannot access prison benefits since it is prevented by retroactive law 321 that is in force (despite the fight that took place inside and outside the prisons in 2019) in addition, Marcelo has several previous convictions for actions of the urban guerrilla of MAPU-LAUTARO, sentences that end on February 28, 2056.

Finally, less than a month after the first year of the revolt that broke out in Chilean territory coinciding with these events of almost 13 years ago. We propagate once again this history of combat and political imprisonment of these comrades who have not stopped – and will not stop – contributing to the autonomous and anti-authoritarian struggle in the streets and currently in captivity.

Lastly, and as is already known, this October 18, 2020 we will all take to the streets to commemorate this new date of memory, resistance and subversion with all possible forms of action.

PREPARE!!
THE POWERFUL ARE TREMBLING!!
1 YEAR AFTER THE REVOLT : LET US CONTINUE SPREADING CHAOS AND ANARCHY !!
COP MOYANO YOU ARE WELL DEAD !!
STRENGTH TO THE LONG TERM PRISONERS !!
WE WANT JUAN ALISTE AND MARCELO VILLARROEL OUT ON THE STREET !!
WHILE MISERY EXISTS THERE WILL BE REBELLION !!

TOTW: The Days Ahead