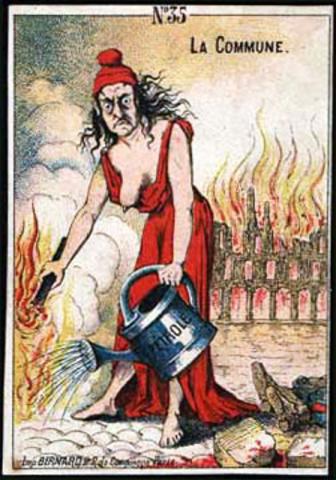 via Anarquía, translation by Anarchist News

“I will then become a worker: such is the idea that stops me, when the mad rages push me towards the battle of Paris – where, however, so many workers continue to die while I write to you! Work now, never again.” 1 Rimbaud

Since 1871 – the year in which the “accursed poet” wrote this letter – it was not necessary to be a “seer” to see the obvious: the masses of workers who fought on the barricades in Paris continued to work. That “wildcat strike” in front of the Versailles authority was, in turn, a new job that produced new obligations and condemned them to perpetuate work in saecula saeculorum. Such deep reflection, in the midst of a necromancing trance, probably prompted Rimbaud to question: who were the passionate communards working for? prophesying a system of domination based on direct democracy as the axis of political-social management, which ensured the permanence of authority and continuity of work.

That is why his furious rejection (never again!) of the process of human alienation, aware that total liberation “consists in reaching the unknown” 2 ; the only escape route from the cultural market to which he was forced to sell his “merchandise.” Perhaps for this reason, for Bakunin – with his subversive spirit and lustful irreverence – those seventy-odd days of generalized insurrection were an endless party and not an exhausting shift of social construction; as well as for the courageous pétroleuses who enjoyed the fleeting moments of the spring of 1871 as an orgasmic apotheosis of fire and sedition. While for Engels, that event expressed the “most vivid example of the dictatorship of the proletariat”, envisioning the future utility of the working mass.

The historical slogan of the Marxians (“abolition of wage labor!”), still reverberates these days reiterated by their own and by strangers –with regrettable acceptance in our camp–, as if the miserable economic retribution of the exploitation of our physical and intellectual force was the problem, and not the work itself, forgetting the root of the word. Although an etymology is not Truth (with a capital letter) but an allegory that at the time allowed us to describe a specific reality constituting the vision of the world in our mind, it is really revealing what the word “work” represented in some period of history .The words «trabajo» (in Spanish), «travail» (French), «trabalho» (Portuguese), «traballo» (Galician), «Trabayu» (Asturian) and, «treball» (in Catalan and Valencian), derive from the vulgar Latin tripalium: an instrument of torture similar to stocks that consisted of “three sticks” “to which the person who received the torment was tied. Hence the meaning of tripaliare: “torture”, “torment” or “provoked pain” 3 .

If etymologically the expression “forced labor” is a kind of pleonasm; under the phrase “wage labor”, the nonsense of the term is exposed, unless it is a question of enthusiastic masochists who consequently refuse to charge for being tortured. Not to mention those peculiar beings so well tamed who love work, far exceeding the narrative of Von Sacher-Masoch, with the forgiveness from all lovers of inflicting pain on themselves (at will) with pleasant results, reconciling the tension between pleasure and death in a profound alteration of time itself 4 .

It’s not by random chance that Debord’s psychogeographic incursions –four years before founding the Situationist International–, ended with a graffiti near the Seine with the inscription “NE TRAVAILLEZ JAMAIS!” (Never work!), Taking up Rimbaud’s battle cry, recharged by the piercing sharp intuition of the Dadaist negation “contre tout el tous” (against everything and everyone) and the “war against work” of the surrealist movement. Nor is it the result of mere coincidence that at the end of the seventies, comrade Alfredo Bonanno and the most courageous anarchic sectors of Italy, focused the struggle on the destruction of work after the experience of the rampant May of 1977, giving free rein to the insurrectionary theses in the face of anarcho-syndicalist immobility and the degeneration of synthesis libertarianism.

In contrast, Marxians of all denominations – Social Democrats, Spartacists / Luxembourgists, Councilists, Leninists (Trotskyists, Stalinists, Maoists and other sub-species), operaists, freelancers, libertarian socialists, and anarcho-syndicalists – postpone the destruction of work and the consequent destruction of the economy, preferring the program of consolidation of workers’ power (communist / anarchist) to this emancipatory moment, stimulating the development of the productive forces and limiting themselves to managing or “self-managing” – in the case of libertarian syndicalists and councilists – the economy, ensuring the development of Capital. From this (short-sighted) vision, not even the situationists would be exempt. Debord himself, would retract that valiant graffiti, opting to promote industrial automation (first) and promote the «society of Councils» (later). Vaneigem would not shed his Marxian DNA either, leaning towards the “Workers Councils” (first) and generalized self-management (later).

This myopic approach undoubtedly obstructs the anarchic aim of demolishing all of the existent. Such a conception, instead of putting an end to the so-called “fundamental contradiction” (capital-labor), destroying labor and the economy and, as a result, Capital, poses a false dilemma between the management of the economy by the “bourgeoisie” and the management / self-management of the «proletariat». In this way, it chooses the form over the content, giving way to a “self-managed capitalism” (as it happened in the anarcho-syndicalist revolution after the fascist coup of 1936) or imposing “state capitalism” (Russia 1917, China 1949, Cuba 1959, Nicaragua 1979 …).

“Jeder nach seinen Fähigkeiten, jedem nach seinen Bedürfnissen” (From each according to his abilities, to each according to his needs) is the aphorism that Saint Charlie of Trier makes his own – after plagiarizing Étienne Cabet and Louis Blanc – announcing the arrival of the “higher phase” of communism, once the guiding principle of the “dictatorship of the proletariat” (“To each according to his contribution” or, in other words, “he who does not work does not eat”), an indefinite period of time where, far from being abolished, the working-class condition is generalized, exacerbating the exploitation of workers in the efficient production of a “better future.” What in practice translates into more of the same, that is, in the continuation of Capital through supposedly revolutionary means implemented around the division between leaders and executors.

What do contemporary revolts produce? Who do the passionate communards of our day work for? These are probably the initial generating questions that help us formulate new questions and list doubts, fears, reflections and proposals, untangling the black threads of our historicity. In this way and only in this way, we will be able to weave the new plot and the warp of the coming struggles. That black fabric will take on the polymorphic body that we will grant it without following old patterns. We will no longer have to continue mending that archaic cloth that was made a century and a half ago on the spinning wheel and loom. That fabric had its own time. The new anarchic plots can only come about in a disruptive way, from an ethos that reaffirms the necessary destruction of work and the power of liberating fire. To continue in the repetition and the current stagnation, could refer us to the historical regression: the imposition of global fascism (brown and / or red).

It is necessary to sharpen our senses to know how to distinguish the smells and keep a watch on what’s cooking. The aroma of the fire will always tell us what’s cooking. It is not a question of rejecting the dish once it is served but of interrupting its cooking. The sulfur aroma of the combustion of oil and its derivatives, causes an unmistakable olfactory sensation that incites a certain transitory state of euphoria and unconsciously sends us a succession of associated images that produce infinite pleasure: a burning precinct, a prison reduced to ashes, a conglomerate of charred antennas, a cremated patrol or a beautiful charred shopping center. This becoming-fire –which lights up the night– causes a liberating commotion that no other means, no war machine, can bring about. It innovates a gesture that makes anarchy perceptible through the flames of devastation.

Gustavo Rodríguez
Planet Earth, September 1, 2020
(Excerpted from the brochure “The aroma of fire: the rage of hopelessness in a tripolar world” , September 2020.)

3 .The word “work” has three European roots that have allowed the semantic accommodation of the term in different languages: Ergon in Greek, Laborare in Latin and the forgotten Tripalium (also in Latin but with a much darker origin). In English, the word “work” is associated with the Latin root of the word Laborare which means “labor”, although its literal translation would be “difficult labor”, hence the expression “labor” (as in childbirth). This Latin root is the origin of a variety of words, including “collaborate” and “elaborate.” Hannah Arendt makes use of this etymological root to justify work, arguing that it has a role in the «process of vital fertility» (La Condition Humana, Paidós, Barcelona, ​​1993). In fact, it is evident that there is an abysmal difference between the words Tripalium and Laborare (or Ergon in Greek) and, its rooted in the ancestral social (and sexual) division of labor with the arrival of agriculture: a sector “destined” to fulfill the painful obligation of work (Tripalium), losing all freedom; and another, “chosen” for creative work (Laborare) in full freedom.

In Europe, there is evidence of the punitive use of tripallium at least until the year 578, while in America the use of this instrument of torture is documented in the decade of the eighties of the nineteenth century and in Mauritania it is still used to “discipline” slaves and (particularly) female slaves who refuse to comply with the demands of their masters despite the fact that slavery was abolished by law in 1981.”