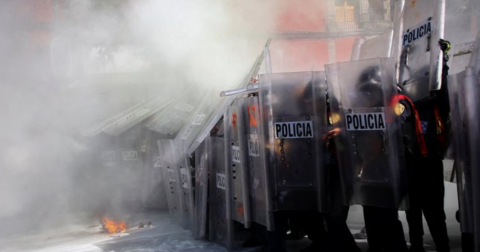 Anarchists attacked the police with sticks, stones and Molotov cocktails in Mexico City during a protest to commemorate the Tlatelolco massacre of October 2, 1968.

In the 1968 Tlatelolco massacre, Mexican armed forces opened fire on unarmed demonstrators, protesting the Olympics being held in Mexico City, and killed at least 300 to 400 people. The massacre took place in the context of a worldwide revolutionary upswing in the late ‘60s and a crackdown on revolutionaries by the US-backed PRI regime in Mexico.

To commemorate 52 years since the Tlatelolco massacre, the Committee of ‘68, made up of survivors, decided not to call the annual march, due to the context of the COVID-19 pandemic. Instead, they decided to hold a rally in the Plaza de las Tres Culturas, where activities began at 10:00 am and a rally was scheduled for 4:00 pm.

Anarchist militants also used firecrackers and baseball bats to fight the police at the demonstration.

A Demonstrator’s Guide to Helmets

Enemies Of The Logic Of Totalitarianism