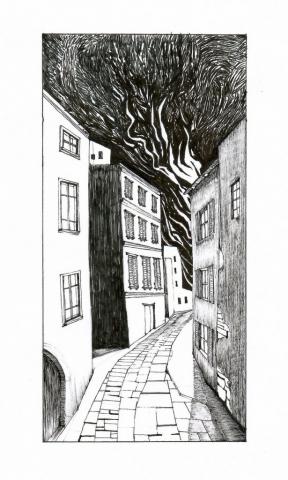 via malacoda, translated by Act for freedom now!

Issue 5 of the anarchist paper Vetriolo is coming out in a new mural, online and paper edition. Our decision doesn’t mean a permanent editorial change in respect to the usual long critical, topical and theoretical analyses. Vetriolo will probably go back to its usual format. The choice of a mural edition was made during the months of mass imprisonment imposed by the State with the pretext of the Coronavirus emergency. In recent months we have felt the need for a form of communication that could break the distancing that the authorities want to put between us all. We felt the desire to see our and your «scream» against repression hung on the walls of our cities, all the more so at an important time for the whole of anarchism, in our opinion, represented by the «Scripta Manent» appeal trial and the endless investigations that prosecutors continue to rig against the anarchist movement all over Italy. A mural edition also wants to be an instrument, like the ancient gesture of putting up a poster, in the hands of the rebels who want to escape future authoritarian scenarios. In anticipation, we are presenting our article on the «Scripta Manent» trial. A contribution in view of the next weekend of mobilizations.

The other articles and the mural poster will be out shortly. To request copies and for contacts: [email protected].

* * *
A contribution for the «Scripta Manent» operation appeal trial
Minds and hearts up!
How many beings have gone through life without ever waking up!
And how many others only noticed they were alive thanks to the monotonous tick-tock of clocks!

Amidst the misery that characterizes this world, there are people with a dream in their heart. A tension that cannot be understood or even discerned by those completely resigned to this status quo, those who traverse their existence without ever waking up, who think that anyway this dream is old stuff, an ideological leftover from the past, expression of anachronistic theories that shouldn’t find space in an ordered society devoted to peaceful survival. It seems there is no escape from this reality – which claims to be final and unavoidable, infesting us every day with its control, false certainties, beliefs and opinions. But even if this «escape» were conceivable or possible, is it that what needs to be sought if we intend to put an end to this asphyxiating order? We don’t think so and never will.

Revolutionary anarchists, we have an irrepressible dream in our hearts, not a simple harmless intellectual expression, chatter, a slogan or an antagonist or «anti-system» soliloquy with which to fill up the emptiness of a subjected existence, because life – real life, not a surrogate, not the obedient existence passed off as the only possible one – needs thought and action, the «exquisite elevation of hands and minds». Because to break with exploitation and oppression it is necessary for offended and crushed dignity to transform itself into action, because we firmly believe that «freedom» is not in any way a right or the duty to obey authority, it is not a life spent on one’s knees. Freedom is above all – here and now – in the challenge against all forms of power, in the wild desire for the practical concrete destruction of authority.

Amidst the misery that characterizes this world, it happens that the roar of a ferocious dream bursts into the streets of metropolises. In spite of the deafening bustle of endless opinions dropped into minds, in spite of the decomposition of any concrete critical awareness, in spite of the constant widespread social control put in place, in spite of the fact that more and more «subjects» are heard asking for the «freedom» of being allowed to be even more integrated and inserted into this murderous system, in spite of all this there are some who think that the State must be destroyed, that there are people, structures and institutions responsible for our condition of exploited, oppressed, excluded, that technology must be sabotaged and attacked now, where it hurts most, that all forms of political and economic order are by their nature bearers of oppression and exploitation, that freedom and authority are and will always be irreconcilable and incompatible. We will always affirm and resolutely defend this dream of extreme freedom – anarchy – knife between the teeth, against every inquisitor, every cop, every judge.

Justice – the State’s apparatus dedicated to establishing rules and punishments, regulations and sentences – needs to seek out, imprison and sentence those who, animated by this dream, autonomously, without asking permission, attack power and rebel against the order they want to chain us to, or who, not keeping quiet, support the irrepressible necessity of attack. We are not interested in knowing who is guilty or carried out revolutionary anarchist actions, this disgusting job is for those who – spying, controlling, arresting, torturing, killing – chose it, undertake it as a job: the guarantors of order, disciplined and obedient servants of the State, watchdogs of the bosses. In the face of justice, we certainly won’t renounce our principles, our practices: our struggle, the unavoidable expression of a permanent social war that doesn’t admit hesitation, is an everlasting affirmation of integral freedom, of the autonomy and potentialities of the individual, it is a raging strike against power in all its forms, including the State’s justice and repressive apparatus.

On 6th September 2016, during a repressive operation named «Scripta Manent», eight anarchists were arrested and accused of having formed or participated in a «subversive association with purposes of terrorism and subversion of the democratic order», of having carried out direct and armed actions claimed by the Informal Anarchist Federation, of having written and edited anarchist publications. About twenty people under investigation, years and years of multiple investigations merged into this repressive operation, a historic publication of the anarchist movement – Croce Nera Anarchica – put on trial, and a huge pile of files pointing out a dangerous truism: anarchists are for the destruction of authority, for the attack against power. Almost at the end of a long trial, the public prosecutor demanded just over 200 years’ prison for the comrades. Up to 24th April 2019, the day of the first-grade trial sentence, a good part of those arrested remained in prison; that day anarchist comrades Alessandro, Alfredo, Anna, Marco and Nicola were given sentences ranging from 5 to 20 years in prison, for a total of 56 years, whereas another 18 were acquitted of all charges, two of them were released.

Amidst the misery that characterizes this world, a dream can enliven a whole life – a living, indelible, iconoclastic, burning dream. A number of anarchists were sentenced to years and years of imprisonment in an attempt to suppress it. In this, an expression of the will to bury comrades in jails and a warning addressed to anyone who thinks that conflict and war against authority must be carried out constantly, sought and lived with fury, without compromise or half measures. But the attempt is all in vain: as long as poverty, exploitation and oppression exist there will be those who struggle to destroy them, as long as there is the State there will be revolutionaries intent on destroying it, as long as there is authority the desire and need for freedom will stay alive. Once again, the intention is in vain: anarchists have always responded blow for blow, without moderation, always pushed by something whose value has no price, something for which it is worth struggling for to the end without hesitation – dignity.

On the occasion of the «Scripta Manent» appeal trial, which began on 1st July 2020 in Turin, today as yesterday, as has been constantly done in the pages of this paper, we openly and fraternally show solidarity with our imprisoned and persecuted comrades. We reiterate without hesitation the actively significant profound and radical value of revolutionary solidarity, aware of the fact that no matter how preventive the enemy’s military and police defence is, the latter will never succeed in destroying anarchy or containing the spread of its principles, because – as the comrade Emile Henry said –, «its roots are too deep. It is born in the heart of a society that is rotting and falling apart. It is a violent reaction against the established order. It represents all the egalitarian and libertarian aspirations that strike out against authority. It is everywhere, which makes it impossible to contain. It will end by killing you». May the powerful, inquisitors, judges and servants of power come to terms with it, it won’t be sentences to bury or intimidate anarchism. From these pages, as elsewhere, we will never stop standing in solidarity with the imprisoned anarchist comrades, throwing vitriol in the enemy’s face, corroding its certainties and beliefs, demolishing the blanket of isolation that it wants to impose on revolutionary anarchism and in particular on the comrades in prison, always supporting the need for solidarity in revolutionary action.

No God no State, no servants no masters.

From Somewhere: Call for a Subversive, Anarcho-Feminist and Dissident March