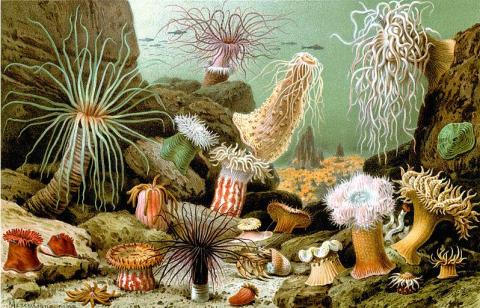 I want my anarchy to be like the Hamper of Gwyddno Garanhir and the Horn of Bran Galed. The hamper multiplied a hundredfold whatever food was placed inside it while the Horn is said to have possessed the magical property of ensuring that “whatever drink might be wished for was found in it”.

We’ve taken a wrong turn somewhere. Where exactly I can’t say for certain, but I think that we need to either go back and try a different direction or stop and make a plan because right now we’re lost.

I guess that some of us are stubborn, we just insist on pushing through, hoping that we’ll eventually stumble onto the right path, insistent on never turning around because we think that would be a waste of time. Who’s right? Maybe we should split up?

Personally, I’m ready to go back to the place where everything was fine. Maybe we can find another path from there. We’re not getting anywhere like this. We’re just stumbling through history, crashing through the forest, mindlessly trampling over everything, ruining everybody else’s habitats.

Digital domestication knocked at my door, scratched at my armour. I looked through the peephole, peeled back a layer of chainmail. It crept into the space between me and my insights, my intuitions, my research, my autonomy. Like the putrid smoke of burning plastic choking my lungs, or the creepy sensation of the chilly titanium digits of a lifeless techno-predator feeling me up, touching and prodding, not my genitals, but my other “privates”, up here, in my brain and behind my eyes.

My free flowing, mysterious, multifaceted source, the original well, is being poisoned. I can no longer understand the trees or the rivers or the boulders or the sun. My world is shrinking, my senses are atrophying, I am becoming a mere reflection, the audience, the trope, the member, the consumer, the victim, the cliche, the image, the user, the object. Although the fact that I can still step out of the dominant reality-culture to reflect on the predicament means that there is hope, that maybe one day we will be able to rediscover self-creating lives. For now we can shun the seductions, keep our feet and bodies firmly against the door so that the intruder might just give up and go away.

One version of the legend of the Caleuche claims that it is crewed by the drowned, who are brought to the ship by three mythological beings: two mermaid-sisters and their brother. Once aboard, the dead can resume an existence as if they were alive again.

Now that sounds like the good ship anarchy! A place where the dead are resurrected, where the debt ridden, anxious, privatized, stunted proletarian, decaying under authority and drudgery can come back to life! Can take the oars and the wheel once again!

Unfortunately we live in the dystopian alternate version of the legend, the one where the mythical ship sails in the sea of Civilization, captivating free people with its enchanting music, its seductions- Progress! Reason! Transhumanism! – to enslave them as part of its crew. And these captives seem eternally destined to have a leg folded over their back- making them awkward, disadvantaged, humiliated.

And so we gather together and we disobey, we mutiny, and we open the sails on a new morning. We begin our network of floating autonomous zones, of bobbing buoys and Bolos, of ships where our spirits and imaginations are resurrected. Navigating the seas, following the stars, far from nation-states and prisons. For many the call has been for “Land and Freedom!”. But we seem to have neglected water, our original nest, our majority element, the blood of our arteries.

Human infants begin life as water beings-nearly 80% of their body weight is water! And our brains are almost all water too. Tom Robbins says that humans were invented by water as a device for transporting itself from one place to another. So here’s to anarchic communes on the high seas, to exploring waters without borders, to boats and ships and rafts and floating eco-villages. Here’s to nomads travelling from shore to shore, free of clocks and cops! Let boat building become one of our shared ancestral skills that we may circumvent authority as we navigate the waterways of our utopian dreamscapes.

Nature is all about gradations. Where does the one start and the other end? There is an abyss inside of me full of fear and the demons of self-doubt. But there is also a mountaintop, where I can see the oceans of possibility that beckon us to keep trying, to stop feeding the masters, to find ways to experiment, to flee, not strictly as refugees, but as bands of explorers and rebels, looking through our scopes for land defenders to stand with, for communards to share food with, for dreamers to dance with on the decks of our rebel ships.

My family is beginning to die. For most of us, all we have is the immediate family. Where is my clan, my larger community? I look at the ruins and wonder-what happened? Who or what has torn the limbs away from my extended family’s body? Where are my kin? Who has stolen my habitat that I might confront them, attack them and perhaps try to reclaim it?

Without a habitat we are dispossessed, we can’t experiment, we can’t put down roots and thus we become like dead leaves, passively blowing here and there. So while we escape onto the high seas, let us also look for isolated habitats in which to create our anarchisms, and let us paddle to the shores to join with those who already have one and help them protect it.

What is the basic unit of anarchy? For some it’s the rational citizen of the municipality, happily skipping between neighbourhood assembly meeting, community garden and democratic workplace. For others it is the free, ungovernable individual, ecstatically dancing between passions and friendships and carelessness. For the ancients it is roaming the natural landscape, running between campsites and water sources, following the elk and singing to the spirits. For the futurists its transhumanists on a trip to an enclosed bio-commune on Mars where robots build gadgets and grow protein in labs.

None of this matters anyway because when anarchy comes, when real, unstoppable chaotic joy and passion in the streets overcomes Normalcy, it won’t be stopping and asking any of us for directions. In the meantime take control of your life. Sit in a tree. Climb to a mountain top and gaze out at Possibility. Build a boat with friends and go get high on the seas…

Anarchy, Harmony and the Maelstrom of Desire

A Political Prisoner’s perspective on COVD-19