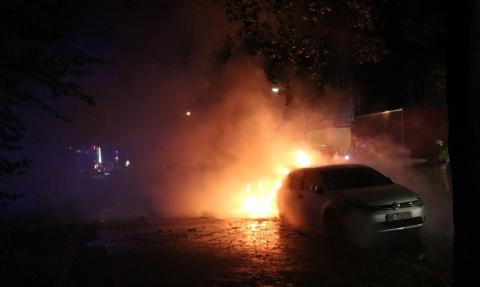 (BERLIN) Another fire in a dark period – Amazon vans burned

No matter which color a government has and which territory it controls, they began to clear the few spaces in the cities which grew in the hope of another life. Squats and non-comercial areas, which tried to exist against state violence and the racist mood in society, came under pressure.

By supporting the international call of Terra Incognita – who got recently evicted in Thessaloniki, Greece- for an action-month in October and the decision to choose ourselves when to act in order to defend Liebig34 and not to wait until the state’s agenda decides when to evict one of our ventures, on the morning of 06.10. we set on fire two vans of Amazon in Berlin-Neukölln as a message of solidarity with Liebig34, Terra Incognita and other collectives who support their calls.

Amazon is a winner of Corona because they deliver more when people stay at home. They deliver with inhuman conditions to their workers. They collect every kind of data to sell it to other capitalist institutions, they share this data with police and establish more surveillance. Amazon is changing cities, in Berlin-Friedrichshain, where Liebig34 has to leave, they built a huge tower. More offices, more expansive flats for their employees, more upgrading of the neighborhood. That’s why Amazon received already many blows, in Berlin and also in US.

We stand in solidarity with the comrades of Terra Incognita and support their decision to keep the collective and continue fighting against the state, the capital and our oppressors. Every eviction has its price and these continuous state’s attacks of this coordinated repression-operations all over the world, on our ventures and on the people of the struggle, will not remain silent. They may take our houses but the nights belong to small groups and their will to sabotage the power.

Destroy the city of the rich and attack the state’s infrastructures before and after every Day X.Defend Liebig34 and Terra Incognita!

ATMs Out of Order in Solidarity with Anarchist Prisoners