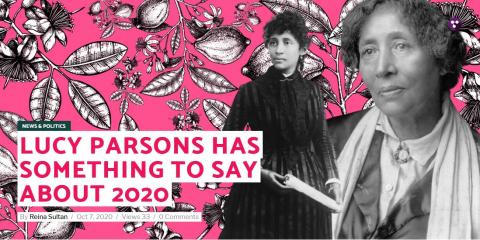 from Wear Your Voice

Described as “more dangerous than a thousand rioters”, Lucy Parsons’ writings and speeches were reflective of her time and continue to be relevant today.

The summer of 2020 was ~eventful~ in terms of political focus on anarchists and anarchism. I rolled my eyes every time an American politician blamed anarchists for chaos, showing clearly how willfully ignorant they were about anarchism as a philosophy.

With all that in mind, I wanted to delve more deeply into the history and words of Lucy Parsons. Her life was also marked with American politicians blaming chaos on anarchists, though this was in the late 1800s. Reading Lucy Parsons: American Revolutionary ended up hitting way too close to home, considering it was about events that happened more than a century ago. I took a lot away from the book, but the biggest takeaway is how applicable Parsons’ ideology remains in today’s political climate.

I would be wrong not to mention that Parsons was far from perfect. Her views on sex workers and sexual liberation were antiquated—causing strife between her and Emma Goldman. That being said, I personally believe Goldman was afforded privileges Parsons never got because of race. Parson’s treatment of her son, who she had committed to an asylum, was also abhorrent. Still, reading about her life and her ideologies has been illuminating.

So, here are four Lucy Parsons quotes to turn to for the rest of this cursed year:

“If the Anarchists had thrown the bomb at the Haymarket they didn’t commit a crime nor violate any law. The Constitution gives the people the right to repel any unlawful invasion in any way they see fit.”

This just feels so pertinent when we look at the so-called violence and looting during protests this summer. I’ve written about it before, but fighting against oppressors is justified violence—it’s self-defense. Now I personally think the Constitution is relatively shitty considering who was included in drafting it, but I can’t argue with Lucy’s logic here.

“And some did rest their chins upon their clenched hands

And some did gnash their teeth and howl, swearing dire vengeance against all tyrants.”

To me, this so perfectly describes the organizers and revolutionaries who are working so hard to dismantle the systems that oppress us. We cannot forget that the uprisings of this summer came after years of organizing and struggling by mostly Black people, who have been working for liberation for centuries (and more recently, since Ferguson). The activation of people during this summer’s actions has hopefully produced a new group of people who “swear to abolish the infamous system,” whether that be capitalism, the carceral state, settler colonialism, or all of them (inshaAllah).

RECOMMENDED: Anarcha-Feminists of the Past and Present are an Inspiration for Today

Prison and police abolition are undoubtedly having a moment right now. When we talk about abolition, the conversation isn’t only about what would be abolished, but also about what would be created. This quote by Parsons illuminates how so much crime in our country is caused by lack of resources and opportunity, where punishment by the carceral state does nothing but exacerbate the conditions that caused the crime in the first place. It feels as though more people are finally willing to accept that the system we’ve been told is meant to provide justice does no such thing. Rather, it is a symptom of a racialized capitalism, one that criminalizes poverty, especially when those who are poor are Black, brown, disabled, and/or sex-working.

“The present social system is rotten from top to bottom. You must see this and realize that the time has come to destroy it.”

This is the one that lights a fire under my ass (and enrages me). People have known that capitalism is untenable and immoral since the 1800s. We must resist the narrative that it’s the natural order of things and embrace the idea that no one person should control wealth in such a way that others are left without enough to live comfortably. It is far past time to destroy the systems that support cisheteropatriarchy, capitalism, carcerality, and colonialism. So, let’s get to it.