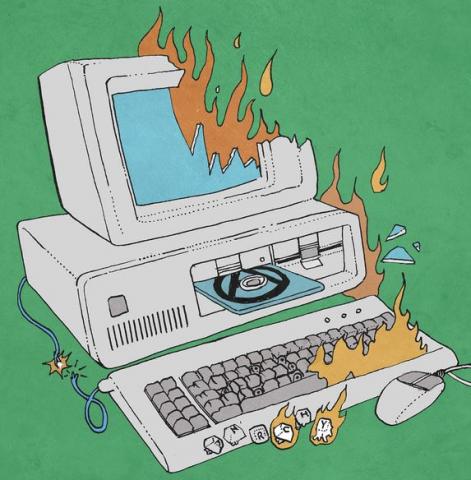 Center for a Stateless Society

The Internet was always anarchist, so anarchists must learn to become responsible for operating it

The fundamental tenet of anarchism is the resistance to an Archos, Greek for “master.” To advocate for anarchism is to position oneself in opposition to a master, i.e., to claim the fundamental right of self-determination, autonomy, and freedom from a centralized system of (especially coercive) control. To act anarchically simply means to act independently of a master. It does not mean acting in an uncoordinated or unorganized fashion, nor does it always mean a total absence of layered responsibilities, more commonly known as “hierarchy.”

The Internet is anarchist because the above describes not only the actual operation of basic Internet network protocols such as Ethernet and TCP/IP, but also its designers’ original intentions. When Bob Metcalfe invented Ethernet in the 1970’s, he intentionally designed his system in a way that would function anarchically. Unlike competing technologies of the day such as Token Ring, in which individual participants deferred to one another based on which one held all the power to speak at that time (the network’s “token” holder), Metcalfe’s Ethernet instead purposefully permitted any participating device to say anything on the network at any time it wanted. Collisions and conflicts were handled independently, by the individual devices creating the conflict through a simple set of rules (carrier sense multiple access with collision detection, or CSMA/CD), a process unmediated by external controllers.

Many engineers believed this approach was too chaotic to succeed. How could a system of coordination function with no command center? It would be pure anarchy!

Today, every Internet connection, local network, telephone uplink, datacenter backhaul, and Wi-Fi signal to your computer uses Ethernet. The anarchist approach proved simpler, more efficient, and ultimately more successful. This is no surprise to any practicing anarchist, although many practicing anarchists still won’t recognize the anarchism in action when they post their next Tweet.

Most people, including and arguably especially most digital technologists, can intuitively understand the principles of anarchic coordination. There are myriad examples of modern technologies with names such as consensus algorithms, cluster orchestration, and distributed ledgers (like “blockchains”) that are, when you actually stop to examine them, fundamentally anarchic approaches to solving complex problems in environments with various degrees of trust between participants.

Large-scale cluster orchestration tools like Kubernetes, a Google invention, function primarily thanks to a coordinating set of components each with very specific, horizontally organized responsibilities that act autonomously of one another, merely responding to changes in their environment as they occur. The Internet’s own Certificate Transparency Log (CTL), which audits the issuance of website security certificates such as those offered for free to website owners by Let’s Encrypt, is a massively distributed consensus database run by many independent organizations that uses the same underlying technology as Bitcoin. The backbones of the Internet itself, like the Domain Name System (DNS) and the Border Gateway Protocol (BGP), are each delegatable systems in which anyone, at any time, can participate simply by connecting a computer with free and open source software to the Internet and claiming responsibility over a new autonomous region, called a “domain” in DNS’s lingo or an “autonomous system number” (ASN) in the language of BGP.

To the newly initiated, this all seems remarkably fragile. And yet, somehow, the Internet has proven surprisingly resilient. But most technologists aren’t able to see the parallels between their beloved technology and the anarchist viewpoint largely because they simply do not spend much of their time thinking about social organization or politics. At least, not beyond the next four-year election cycle.

This must change. And we’re going to change it.

How? Such a change will not happen through the proliferation of code bootcamps or “learn to code” initiatives. It will not happen through diversity campaigns sponsored by and centered within the tech industry. Technologists, like most people in a comfortable and financially privileged societal position and class stratification, are not generally willing to examine their biases or change their worldview. It is both unreasonable of us and strategically foolhardy of us to ask them to.

Simply put, the cost of radicalizing technologists is enormous. Changing an individual’s worldview is a very heavy lift. As a strategy writ large, it is a failing one. The “battle over hearts and minds” is not a battle worth fighting, at least not directly, because what changes hearts and minds is not reason, but experience. Not reciting facts about the present, but taking actions that inspire imagination about the future. Not engaging in debates, but actually making concrete changes in someone’s material circumstances.

Meanwhile, the cost of training radicals in modern information technology, on the other hand, is negligible. It is of course also difficult, but it is nowhere near as difficult to learn a new set of skills as it is to learn an entirely new and paradigmatically different worldview. As a strategy writ large, “technicalizing radicals” is one with boundless potential, while “radicalizing techies” has proven to be a disastrous waste of time.

Today’s activist landscape looks very different from the days of Civil Rights marches, the Anti-War Movement, or even the Anti-Globalization Movement prior to 9/11. If we are to traverse this different terrain, we require a different kind of vehicle.

This is not a particularly new idea. Some will remember the Crypto Wars in the 1980’s and 1990’s, in which governments reserved encryption technology solely for military use. Cypherpunk and early “Hacker” culture sprang from this era. But neither cypherpunk nor “Hacker” communities were particularly anarchist, in either ideology nor practice. Instead, they largely imported and mirrored mainstream ideas such as gender, economic, and racial stereotypes, spending most of their time naively imagining themselves in a far-flung utopia in which the mere existence of technologies relying on anarchic methods would inevitably lead to a reformation of society with equality and justice for all even as reality turned increasingly towards nightmarish dystopias.

By and large, technically skilled hackers wrapped themselves in the glow of their terminals the way politicians wrap themselves up in their country’s flags. They mostly ignored the forces of industrialization re-centralizing the Internet and turning it into massive digital strip malls like Facebook. By the time they awoke from their Matte-fueled reveries several decades later, their world had been colonized and their comrades would be targeted as criminals under laws like the Computer Fraud and Abuse Act enacted a decade or more earlier. Famous exceptions such as Pirate Bay founder Peter Sunde notwithstanding, the earlier generation of hackers fumbled because they failed to recognize and center the importance of the anarchist principles underlying the very technologies they wrongly treated as inherently liberating.

If they had brought a more explicitly anarchist lens with them, they would have recognized that neither anarchy nor liberation are states that can be described by their state machines, but rather they are constant processes in which individuals must repeatedly take action to reaffirm their resistance against the formation of an Archos.

Today that means politically conscious anarchists must take responsibility for the operation and administration of interconnected networks of communication, if not also the capital-I Internet itself, in order to ensure that fascism is constantly beaten back. This goes beyond merely “no-platforming” fascists and coding the next much-hyped Web app, social network platform, or encrypted messenger. That’s not enough. Not by a long shot.

Instead, anarchists must make ourselves capable of physically running networking cable from one neighborhood into another. We must learn to administer critical internet functions like the Domain Name System ourselves, independently from commercial providers. We must work to scale out, rather than scale up, massive datacenter operations and place them physically in the communities that rely on them instead of halfway around the globe, for exactly the same reason we must abolish police departments whose patrols are often conducted by personnel who don’t live in the neighborhood they are responsible for policing.

This is a lot of work, but not as much as one may at first think. Best of all, the resources it actually requires in terms of money and equipment are minimal and becoming ever more ubiquitous. There is also no need to write new code or build new apps to make this happen. We already have all the raw materials we need to get the job done. The only thing we lack is broader commitment from anarchists, themselves.

In New York City, several anarchist and anarcho-autonomist collectives have been slowly converging to provide technological and digital infrastructure support services to anti-fascist, anti-racist, and anti-capitalist organizations in a repeatable, reproducible way. These services range from computer training for activists and advocacy groups to direct assistance with digital components of advocacy efforts, and even private audits of an ally’s security posture when requested.

Some groups, like Anarcho-Tech NYC, are entirely volunteer-run organizations operating without any licensing or legal recognition and a financial budget intentionally as close to zero as possible.

Together with technology-centered community groups like Shift-CTRL Space who connect local, grassroots organizers with free resources on technology, this growing “digital rainbow coalition” focusing on a range of IT and telecoms infrastructure and education initiatives is demonstrating how to have an outsized impact on anti-fascist organizing in the 21st century.

As anarchists, we like to say that another world is possible. The truth is, another world has been here all along. It’s in the palm of our hand every time we read a text from our friends. All we have to do is learn how it actually works.