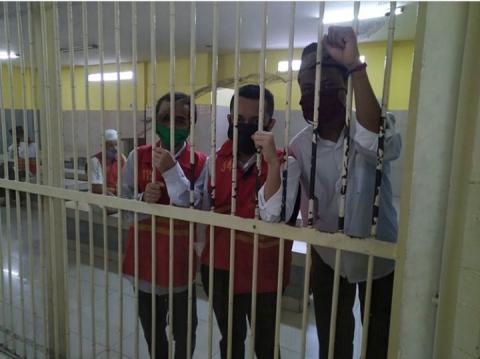 A report written by the Anti-authoritarian Federation (FedAO) of Indonesia and an update to “Anarchist Prisoners Trial in Tangerang and Bekasi in Indonesia.”

We (Indonesian Anarchist Black Cross | Without Adjectives |) are reproducing this here to signal boost this news to the international community.

Monday, September 28, 2020, the Tangerang District Court (Pengadilan Negeri) Judges read out the verdict of the trial of alleged vandalism. The Judges sentenced Muhammad Riski Riyanto Bin Abdul Syukur and Rio Imanuel Adolof Pattinama aka Petrus Adolof Pattinama to prison for 10 (ten) months in case No: 1136/Pid.Sus/2020/PN Tng because they were considered legally and convincingly by the judges, spreading false news, and deliberately spreading disturbances among the people as regulated in Article 14 Paragraph (1) of Law Number 1, Year 1946, concerning Criminal Law Regulation.

Meanwhile, Rizki Julianda aka RJ aka Zonee, who was tried separately in case No: 1135/Pid.Sus/2020/ PN Tng, was sentenced to imprisonment for 8 (eight) months because he was proven legally and convincingly committed in public orally or writings incite in order to committing a criminal act, committing violence against public authority or not obeying either the provisions of the law or a position order given based on the provisions of the law as regulated in Article 160 of the Criminal Code (KUHP).

Previously, April 9, 2020, Rio Imanuel Adolof Pattinama aka Petrus Adolof Pattinama (23) and Muhammad Riski Riyanto Bin Abdul Syukur (21) were arrested by the police for doing graffity using spray paints at several points around Anyer Market, Tangerang, as a form of protest against the state because of impartial policies during the Covid-19 pandemic. Meanwhile, Rizki Julianda aka RJ aka Zonee (19), was arrested in Bekasi because he was considered an anarcho-syndicalist group member that would cause chaos.

This decision was considered by the three attorneys to be a heretical decision. The attorneys says that the judge issued a decision without at all considering the facts of torture and the fact the law is revealed in the trial as a whole.

“The judges ignored the fact that there had been torture against the defendants, violations of procedural law and violations of the rights of the defendant so that the series of investigations, prosecutions and examinations at trial should be deemed flawed because they used evidence obtained from torture (fruit of poisionuss tree),” he said. Shaleh Al Gifari, one of the defendants’ attorneys.

In addition, the attorney also considered that the judges did not analyze the elements of crime by using legal theory and doctrine and tended to interpret the article broadly.

“The criminal verdict against Muhammad Riski Riyanto and Rio Imanuel Adolof Pattinama is clearly inappropriate for the judges to use Article 14 Paragraph (1) of Law Number 1 Year 1946 because based on the facts revealed in court, they should only be subject to administrative sanctions in the form of an oral/written warning by The local government is deemed to have violated public order as regulated in Article 7 of the Tangerang City Regional Regulation Number 6 of 2011 concerning Public Order. In addition, the writings or messages conveyed by both are legitimate criticism and are part of the response of citizens to the country’s failure to protect all Indonesian people in this pandemic situation, so that it cannot be said to be fake news, especially deliberately publishing chaos among the people,” add Gifar.

Meanwhile, in Rizki Julianda case, the judges should have released him because all the articles accused him were clearly not proven in court.

“The judges decided to use Article 160 of the Criminal Code against Rizki Julianda. This article is a material offense as decided by the Constitutional Court through the Decision of the Constitutional Court Number 7/PUU-VII/2009 dated July 22, 2009 and explained by the expert presented by the defendant’s legal counsel at the trial. Material offense means that the perpetrator can only be convicted if the prohibited consequences arise. However, the judge interpreted that the defendant’s act of creating a telegram group, eventually resulted in a graffity incident in Tangerang. This is clearly a very broad interpretation and is not based on the facts of the trial, that the graffity were spontaneous actions by the defendants Muhammad Riski Riyanto and Rio Imanuel Adolof Pattinama for their restlessness over the handling of the corona pandemic by the Government. ” Said Gifar.

The Attorney also criticized the judge’s decision regarding the evidence confiscated and it was decided to be seized and destroyed, namely 1 (one) 15.6 inch monitor, 1 (one) keyboard, 1 (one) mouse, 1 (one) unit of printer, 1 (one) unit of CPU, 3 (three) units of mobile phones as well as several books and novels that should have been returned to their owners because they were not directly related to the criminal acts deemed committed by the defendants. The destruction of books and novels is also a bad precedent for the tradition of freedom of thought and expression in the future.

What the fuck is New with LBC!