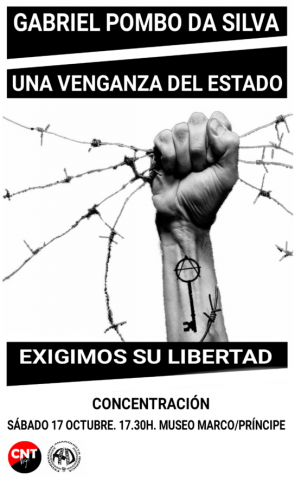 Comrade Gabriel Pombo Da Silva was arrested in Portugal, on January 25, by virtue of an EAW, Euroorden, issued by the Criminal Court No. 2 of Girona, of which Mercedes Alcázar Navarro is a magistrate, which, in May 2016, he ordered the then director of the Dueñas (Palencia) prison to hide the order for the immediate release of Gabriel who, after three weeks of “kidnapping”, was finally released on June 16, which is why the procedures were put under way to denounce her for perversion of justice. Each may come up with their own conclusion about the reason for the obstinacy of that magistrate judge in proceeding by means of an EAW to the European persecution of the comrade, despite the fact that Gabriel was released in Spain, said June 16, 2016, having served the entire sentence . It has been clarified that after that date, our comrade has not been incriminated for any crime, and therefore there does not exist a subsequent penal sentence.

That Girona Criminal Court and its magistrate judge have availed themselves of an EAW (procedure that came into effect on 1/1/2004, Framework Decision of the EU member countries) with the aim of facilitating the delivery of the accused and expediting judicial cooperation between them. Among other measures, it provides very short bureaucratic deadlines, simplifies judicial procedures and eliminates the principle of double criminalization for a large number of crimes, being difficult to oppose by the country called to surrender the accused, provided that all requirements are met (exposed in a list of 63 types of criminal offenses) and the 3 exceptions that allow opposing that order are not given. Thus, it is more difficult to challenge now than before extradition between member countries of the EU.

After his arrest in Portugal, the second part of the trial in that country, which had started on 01/27, in Porto, took place on 02/26 at the Guimarães Relação Tribunal (2nd Instance), which he did not present opposition to the EAW issued in Spain. An appeal was made to the Supreme Court of Lisbon, which also did not object.

– Thus, on May 13, Gabriel was handed over to Spain, entering the Badajoz Penitentiary Center.

– On June 11, the Girona Provincial Court issued a sentence of 30 years in prison against him, of which, by virtue of that order, the comrade has 16 years, 2 months and 7 days to complete.

– Said sentence has been based on the non-recognition of the “principle of specialty” in Spain, which, however, was recognized in high judicial instances, in Germany, in 2016, issuing an order for immediate release from the Dueñas prison (Palencia ) for considering his incarceration irregular in every way.

– His mail is being intervened with, so the letters, always by certified mail, must be of encouragement and moral support, without political content.

On the Insurrection in the USA: An Interview with Anarchists/Abolitionists by RadioFragmata (Greece)