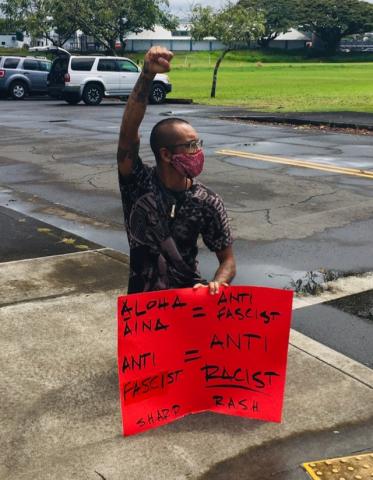 NOTE: This article is from an upcoming issue of Rock! Paper! Scissors!, the Jesus Radicals online journal. The theme of this upcoming issue is Decolonization; this is one of about thirty articles. We are pre-releasing a few articles today in recognition of Indigenous Peoples Day.

Before I begin I’d like to say mahalo to Seth for providing me with both the opportunity to contribute and the impetus to write, and aloha to my Gangjeong friends whom I am excited to join in this issue. Feeling the power of Jeju and Geurombi, being a part of Peace Camp and the Grand March, and learning from the people of Gangjeong was a pivotal, life-altering experience for which I will be forever grateful.

I feel compelled to admit my surprise that I am writing for any sort of Christian outlet, let alone an Anarchist one considering my upbringing and general standing on Christianity (or Christianism, as I think of it). I grew up in a Foursquare Gospel megachurch called New Hope Christian Fellowship on the island of Oʻahu in the illegally occupied Hawaiian Kingdom, known commonly as the U.S. State of Hawaii.

The 2019 Mauna Kea protest movement coincided with the 200th anniversary of the Battle of Kuamoʻo, which was fought to preserve the old ways even if not as the dominant social order. In this situation, Kekuaokalani and Manono, the husband and wife chiefs who led the rebellion against the forces of Liholiho (Kamehameha II) and Kaʻahumanu (a wife of Kamehameha I and self-appointed Kuhina Nui, or Premier) did not immediately succeed in their objective and met the end of their human lives on the battlefield. However, 200 years later makes a difference and so we again see the same fight being fought.

As it happens, this year marks the 200th anniversary of the arrival of American Calvinist missionaries in Hawaiʻi, following the overthrow of the Kapu system by the wives and son of Kamehameha I (who had united the independent chiefdoms of the Hawaiian Islands under a single rule). [The term ʻaikapu (English: Kapu system) describes the traditional Hawaiian worldview and the entire religious/sociopolitical structure around it.] Then, in 1893, the grandsons of those same American Calvinist missionaries and an assortment of white colonial settler co-conspirators overthrew Queen Liliʻuokalani with the help of the US foreign minister and a company of marines, thus declaring a Provisional Government with the intent of annexing Hawaiʻi to the US. The US admitted all this and more in the “Apology Resolution” of 1993, enacted on the 100th anniversary of the overthrow. This was preceded by an apology issued by the United Church of Christ for its role in the overthrow of the Hawaiian Kingdom.

Though missionaries did introduce the written word, at the time of the ʻaikapu overthrow Hawaiʻi boasted a 99% literacy rate in the ʻŌlelo Hawaiʻi, the mother tongue. Ultimately the missionaries and their descendants attempted to take our language from us completely and nearly succeeded. This is to say nothing of our land, our way of life, and even our very identity. This is colonialism to a T. So by now I’m sure you understand the irony for me of writing for anything remotely Christian. I myself am not a Christian, if you hadn’t guessed, but I am an anarchist.

In order to properly and quickly understand the traditional Hawaiian worldview, it would be best for me to provide ʻŌlelo Noʻeau, or proverbs, so to speak. And yes, pun intended. The two which I have selected below are perhaps some of the most well-known and which I find to be two of the most comprehensive and succinct for our purposes. They are as follows:

He aliʻi ka ʻāina; he kauwā ke kanaka.
The land is a chief; man is its servant.

A hallmark of indigeneity is the relationship of the people to the land. The language is how the people communicate not just with each other, but with their ancestors and with the land itself. Take the people from the land and take the language from the people and you can crush their spirit. Though the spirit cannot be killed, it can be broken and take generations to heal. The psycho-emotional scarring induced through generations of trauma are perpetuated through cycles of abuse as well as external factors such as systemic and institutional racism, white cis-hetero patriarchy, etc. Like the deepest wounds, these do not merely heal on their own; they take conscious attention and dedicated effort over a long period of time, even generations-long, since trauma is hereditary.

But it does us no good to wallow in the trauma, now does it? What can be done? For native peoples, including diasporic and enslaved peoples, the answer is as above: the land (if you are living on your ancestral lands), our ancestors, our traditions, and our native languages. It is not for me here to detail these exactly because each of our journeys is our own. With that, what else is there for the rest to do? Well, start by examining your privileges. Are you native (aboriginal/indigenous, not “native born”) to the land you live on? If not, whose ancestral lands are they? How can you support their efforts and their autonomy without centering yourself or being appropriative or transactional? How can you develop an intimate personal relationship with the land itself that is based on caring for it rather than extracting from it? If you live in a settler colonial state, are you aware that you have privileges as a colonial settler? How do your actions/presence have a detrimental effect on the land and its people? These are the kind of things to be asking if you’re sincerely trying to decolonize yourself. Ultimately, the internal process of decolonization is something akin to deprogramming one’s self from a cult. It takes time and serious scrutiny of your own thought processes. I’m glad that the concept of white privilege is now common enough that people are able to grasp settler privilege, as well. (Let’s also make it perfectly clear that using native issues as blinders is not an excuse to ignore issues like anti-blackness, homo/transphobia, Islamophobia, anti-Semitism, patriarchalism, etc.)

I’m going to end by borrowing a quote from “The Souls of White Folk” by W.E.B. DuBois which I came across thanks to author Mark Bray. It reads as follows: “This is not Europe gone mad; this is not aberration nor insanity; this is Europe; this seeming terrible is the real soul of white culture—back of all culture—stripped and visible today.” From this the point Bray makes is that, while written about the first world war, this sentiment was already known to the victims of colonialism and imperialism. The same can be said of the rise of fascism and the second world war. Substitute “Europe” for “America” and those words are as prescient now as ever. “This is America.” (As I recall, that’s also the name of a particular Childish Gambino song. Coincidence? Perhaps not.) In a similar vein, what does it mean to say “This is Christianity?”

Decolonization is not supposed to be a comfortable process nor a metaphor. Itʻs not supposed to feel good. Looking at one’s own privileges (complicities, even) in the mirror is never pretty.

Puaʻena Ahn is ethnically Kanaka Maoli (“Native Hawaiian”), 교보 사람 (Kyopo Saram- foreign born Korean), Loochoo (Okinawan), Visayan (Filipino), Chinese, with single digit blood quantum percentages from Congo-Cameroon and Mali. He identifies as a male cisgendered Anti-Colonial Intersectional Anarchist, and a R.A.S.H./S.H.A.R.P. (Red & Anarchist Skin Head(s)/ Skin Head(s) Against Racial Prejudice) punk. All redundancy/overlap is deliberate and intentional. Pua’ena grew up in the Honolulu, Hawai’i, punk rock scene in his late teens and early twenties. He is an alumnus of the Kamehameha Schools Kapālama campus. Puaʻena has been active in the Hawaiian Sovereignty movement for the last 10 years and was featured on the anarchist podcast From Embers out of so-called Canada. Puaʻena was also a keynote speaker at the 2018 Inter-Island Solidarity For Peace For The Sea Camp in Gangjeong, Jeju-do, Korea. If you have any questions or comments, he can be reached via the editorial board of this journal.