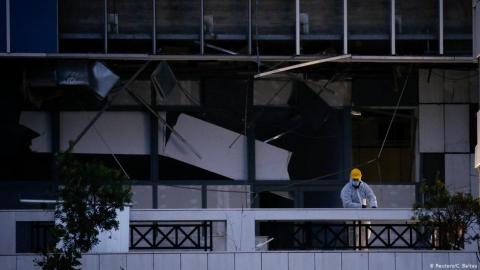 from attaque via AMW

Two anarchist comrades, Polycarpos Georgiadis and M.T., were arrested on September 23. They are accused of being behind actions of the guerrilla group OLA (Group of People’s Fighters).

On the afternoon of September 23, two comrades were arrested by the anti-terrorism cops. One, Polycarpos Georgiadis, is caught walking into a store in the Koukaki district of Athens. The other, M.T., was arrested in the street and taken to the GADA (Athens Central Police Station). After the arrests, the searches. At M.T.’s house, the cops find two pistols, which leads to his arrest, along with that of his partner, E.M., with whom he lives. In the store where Polycarpos was entering, the cops find AK47 projectiles and explosive; at his home they seize all computer storage media and any revolutionary publication.

A few days later, the comrades pass in front of the judge of freedoms. Following a ballistic examination, the pistols found at the home of M.T. and E.M. do not appear to have been used in actions and the two are released from prison, awaiting trial. Polycarpos’s case, on the other hand, is different: his arrest is confirmed and he is imprisoned in Larissa prison.

These searches were not carried out by chance, but they are the result of investigations that have lasted for months, investigations through which the anti-terrorism agents have scrutinized these two comrades. The police are assuming that the defendants are behind OLA* (Group of People’s Fighters), a group that has claimed nine actions since 2013.

Following the famous double-level theory, newspaper articles (on indication from the police) maintain that the Taksiki Antepithesi** group (of which the two comrades are part) is a breeding ground for recruiting members for OLA. In the catch-all of the actions that investigators would like to stick on the back of the group of comrades, there are also incendiary attacks against Golden Dawn, for which there had already been arrests in December 2020.

Great importance, to justify this detective hypothesis, is given to a PDF file found in Polycarpos’s computer, with a claim from OLA; counterterrorism agents would pass this file off as the original version of the claim, even if it is only a file downloaded from a few movement sites after the claim was published.

Again, their evidence is just smoke, but their political will is very clear. Polycarpos will surely remain in jail for a long time. Another thing that we are sure is not over yet: Police spokespersons continue to tell newspapers that investigations are still ongoing and that there may soon be more arrests. Precisely, a few days after September 23, the police raided the home of a comrade who works in the same bar as Polycarpos, to carry out a search, and there also seized printed matter and computer equipment.

Shortly after the arrests, a solidarity assembly was called, which saw a great turnout, and initiatives were launched, which will certainly continue in the future. More news will follow.

Freedom for our comrade Polycarpos!

Anarchy, Harmony and the Maelstrom of Desire

Pandemics, Schools and Squats in a Civil Society built on Stolen Land