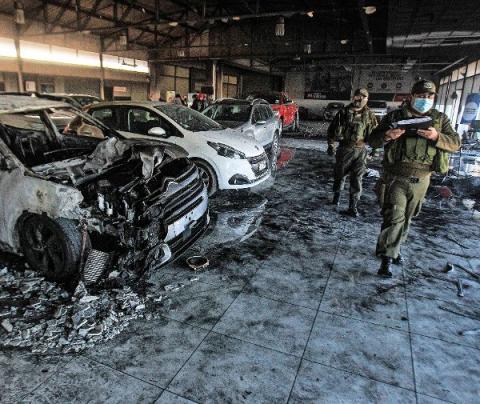 During the morning of October 5, 2020 in the city of Concepción, an incendiary artifact manages to set ablaze the interior of Automotora Maritano Ebensperger, producing the total loss of 4 vehicles, as well as damages inside the office.

Around 06:00hrs an anonymous call alerted GOPE so that they would head to a service center due to a bomb threat. There the police found a bookbag with cables and elements that simulated an explosive change, at the same time and fifteen blocks from that sector the fire was starting to expand in the interior of the car dealership.

The attack occurs amidst a wave of national protests for political prisoners and prisoners from the revolt, as well as a few days before the plebiscite for a new constitution.

A responsibility claim was found at the site of the attack .

From the press: BioBio

Transcription of the responsibility claim:

(Taken from the press)

“We’re nothing, we’re nobody.”

Don’t look for us in any place, because we’re everywhere, we grow on trees and come out from under the rocks. We’re I, you, him/her…and we know we’re accomplices.

We don’t have a car to sell, because we move on foot, little by little, step by step. Even though we walk very slowly, unsure, stumbling every now and then like children, we’ll keep rejecting paternalist support from those who sell ideology and revolution; from those who lead and recuperate popular struggles to increase the curriculum of their organization and, in this way, justify their own existence and ineffectiveness, from those who consciously collaborate in the perpetuation of the existent.

Because the only valid ideology is the one that evolves day by day and is discussed, is changed, is felt and is practiced in the quotidian. We don’t need polls to decide our destiny, nor plebiscites, nor questions, our destiny is weaved with rebelliousness and action.

We prefer to say what we think and do what we feel, what we want, what we can, what they let us. Because the only possible revolution (if it’s possible) will come from ourselves, from the total and direct participation of each and every one of us. Realizing our desires is in our hands, no one should think nor act for us.

We’re nothing and no one, save for ourselves. We don’t have anything to prove, nor reason to justify ourselves nor be held accountable to anyone. We’d rather disappear than surrender to authority; law, order and supposedly revolutionary rhetoric that some attribute to themselves; professionals of struggle that intend to monopolize our dreams and ideas with their acronyms. We’d rather cease to exist that to hand over the control of our lives and struggles to the perpetuators of State-Capital.

Spanish State: Destroy What Oppresses You