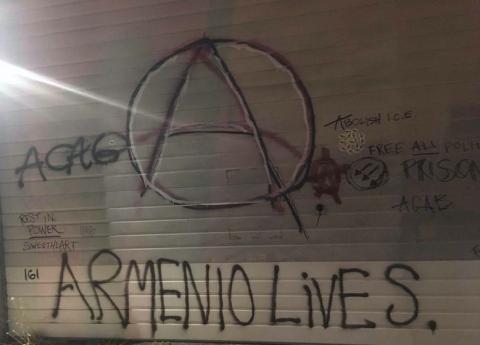 In the earliest hours of this morning, 161 windows were broken all across so-called Portland in memory of Sean Kealiher AKA Armeanio Lewis. Banks, luxury cars, new condos, school buildings, businesses and more were joyfully smashed in by individuals acting in a coordinated attack. We moved purposefully, acted quickly, and no one could stop us.

It was fun as fuck! Policing, capital, authority— they are everywhere, we can attack them anywhere, and have fun doing it!

We remembered Armeanio as our hammers smashed through the front of the bank, we thought of his grin as we hurled a brick through a second-story window, and we heard his laugh in the crash of broken glass that shattered the silence of the night. They tried to kill him, but ARMEANIO LIVES MOTHERFUCKERS! He lives in every bike lock swung through the air, in every quiet night broken into pieces by our riotous joy, in the heady anticipation we feel as we approach our target, tools in hands, hearts racing.

We issue a challenge to you: over the next week, go out, with a friend or alone, and smash some windows for Sean. Get rowdy, have fun, fuck shit up, and through you Armeanio lives!

A brick for every window— long live Sean and long live anarchy!

-some wild young anarchists in So-called Portland
.
.
We share two of Sean’s essays in his memory: