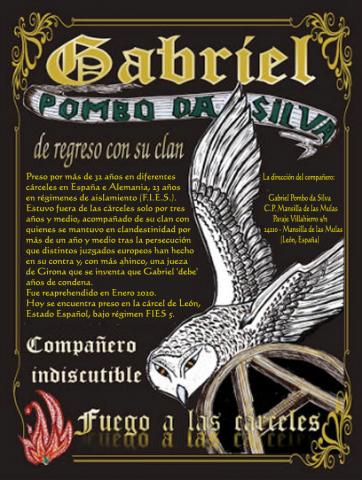 To all the solidarity comrades.

With these lines we want to update very briefly the situation of our comrade Gabriel Pombo da Silva.

Since he is in the prison of León, for the first time in his life as a prisoner, in general one can say that he is not suffering from open provocations and that he is being left “in peace”. However, a few weeks ago they began not to deliver the books sent by mail with the old excuse that they have no legal deposit (some have legal deposit and others do not) and it seems that correspondence has become slower, which, until now, despite the intervention of communications, has worked quite well.

After, in one specific mailing, the book abduction ended in a notification issued by the Prison Supervision Judge, we ask all our comrades to never send, by mail, books or publications of any kind, only letters and postcards.

Gabriel’s legal situation is still complicated and, given the great work that remains to be done, we cannot afford to waste time and money in resorting to this type of notification (something that obviously needs to be done).

Anyone who wants to send books to our comrade can do so at the following address,
specifying that the books are for Gabriel:

Only publications with legal deposit, sent to that address, will be introduced, in the packages, on the days visited by the speaker.
Our comrade is in good health, in good spirits and sends strong hugs full of determination to his comrades in solidarity and dignity in all corners of the world.

Here again the address for writing to Gabriel:

The Difference Between “Just Coping” & “Not Coping At All”