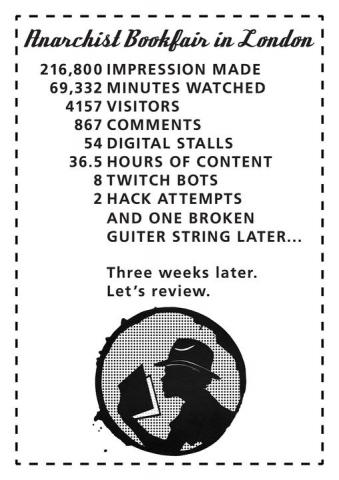 First off, we just wanted to offer a massive thank you to everyone who contributed to the 2020 Anarchist Bookfair in London, all of you who contributed lives panels, talks and pre-recorded media regardless of whether it was made for the bookfair or not, thank you for making take part and sharing your knowledge, information and skills with us all.

It’s been a couple of weeks since the bookfair and we’ve had time to not only catch up with the sleep but also take stock of everything, and aside from the expected griping from pettifogging purists and our more frothier in the mouth correspondents the event was pretty much universally accepted as a success and a good punt from a crew who for the large part were organising a bookfair for the first time but were also tasked with manifesting a digital one. It would however been a flat experience without the input and active participation of some of the four thousand people who stopped by and shared their thoughts.

Behind the broadcasts on the Discord and in other places we found ourselves with the anarchist knitting circle vibe that makes bookfair, well bookfair. Conversations and debates were had, Anarchists young and old chimed in with their thoughts, not just with ourselves but more importantly with each other. Our primary remit when we launched the campaign to return a bookfair to London was to try and crack out of the Anarchist echo chamber which our movement so often finds itself with in, and I think we did that, sure in a small backwood of the internet perhaps, it may not be much in the grand scheme of things, but it was a something and it was a something we only aim to improve on.

So let’s just get the big news out now. We will be organising an Anarchist Bookfair in London come October 2021. We hope that this will be a physical event, however we will at the least be holding a digital event, in a perfect world, we’ll have both. We will be uploading all content from the bookfair over the next couple of weeks as separate videos and we’re going to be keeping the website up as an ever expanding digital space for Anarchists. This means that slowly we will be establishing the library and Gallery spaces as well as improving the look and feel of the “stalls”.

We’ll also be keeping hold of the Discord space and the Twitch pages, the first we intend to use as a casual space for anarchist chit chat and organising and the second we will be utilising in a couple of ways, primarily by making it available to other bookfairs and organising collectives who might have a need for a streaming site. Similarly our behind the scenes technical stuff, accounts and contacts are all available to comrades who might require them, especially those looking to organise a bookfair. We’ll be organising next years event proper from January so you can expect us to be putting out calls for folk to join the collective and stuff then, in the meantime we’ll be focusing on making some minor improvements to the website and all that.

Speaking of improvements The best way to improve on something is a good honest splash of cold water to the face and taking stock of where you messed up. The big one here is just how close to the wire we left much of the technical stuff, sure part of this is lockdown, part of this was the condensed timeline we found ourselves on once we said “OK let’s do this”. The three major examples of this were that the web development rested on the shoulders of one member, who quite literally spent every spare moment in the last few weeks running up to Bookfair building the website from the ground up. This rather last minute cram session was reflected in the fact that the poster was not put out until the day before, the ability to donate by purchasing a copy was added halfway through the second day (Now THAT is keeping Anarchist time!) This wasn’t the artist’s fault but the late juncture in which we even started that process, we had a revised version of the organising timeline which Bristol Anarchist Bookfair use and when we came to review it for “Digital bookfair” we should have been much more giving with the allotted time required.

This haphazard approach to timing also exhibited itself in the broadcast schedule. We absolutely should have provided larger windows with more space which contributors could have filled up or not as they felt the need. This was particularly an issue with the Sasazuka Collective who had a criminally short QnA and the Green Anticapitalist Front who we had to leave just prior to the streaming of their QnA section. We really should of either had a fourth channel to provide more space for the sessions or been more judicious and held less session.

Speaking of the sessions, like, I suspect, every bookfair organiser since day one, we were tasked with deciding how much of the content was organised or solicited by “The bookfair” and how much offered to us by the anarchist community and it’s periphery. As a collective we feel that bookfair is what the community make it more than anything so we were quite keen to provide a platform first, however we did intend to include more content around issues such as the ongoing black lead global movement against police brutality and the very much in focus threats to the queer community but domestically and internationally to name a couple.

We did initially had a much wider reach of “stall holders” planned which was subsequently reduced in the transition to a digital space and well, for a variety of reasons, some of the planned sessions never went ahead. We’re quite conscious of this and tho, like I said we are not particularly keen to inject our own voices into the schedule, it’s somewhat our duty as hosts to platform voices which are not heard enough in our society and sadly, all too often within the anarchist community itself.

We also had a lack of practical “this is how you do it” sessions. Organising these sessions as well as everything else is probably a bit much to expect from a small handful of sleepless organisers, but perhaps we could of prodded some comrades into it prior? There were a couple of such session from the Anarchist Federation that were cancelled due to lockdown, but still, it would have been nice to see more propositioned.

At the end of the day the schedule of events was what the community made it so if you feel there was a distinct lack of something, consider putting a session together and bringing it to your local bookfair where ever that may be! Remember the strength of Anarchism is that we don’t simply defer our responsibilities to others or expect them to perform to our expectation but in active participation and involvement. If you are capable of giving that session on “dealing with the landlord” or what have you, don’ t sit on your hands thinking someone else will do it, get it written, get it sorted and get it sent in!

Finally we wanted to talk about accessibility. Specifically BSL, which we had hoped to have on all sessions, especially the lives ones. Three were three avenues we were exploring with this, all of which fell through. Of the two comrades who were keen, one had a schedule conflict and I believe the other had a loss in the family and obviously was focused elsewhere. We would like to have organised 2 whole days of professional BSL on both streams, however we had previously decided to abstain from soliciting donations feeling that they were better served going towards mutual aid networks and then BLM organising. Subsequently after paying the bills, our operating budget is in the double digits at best if it’s even in the green. If you are a comrade who knows BSL and you would be up for recording some translations of videos, please get in contact with us, we would be very keen to add you on after the fact.

There are other things of course but mostly technical and boring, notes of how we can improve our on the day organisation and the like but those are the big issues which we hope to confront and improve upon for next year. We hope you’ll join us for that maybe even join the collective help keep the Anarchist Bookfair in London, alive and vital at a time when we need our community spaces more than ever. No doubt a lot is going to change over the next years, but we will be there for sure, planting seeds of revolution and chewing bubble gum.

Till we speak again.

Anarchy in the age of the robots