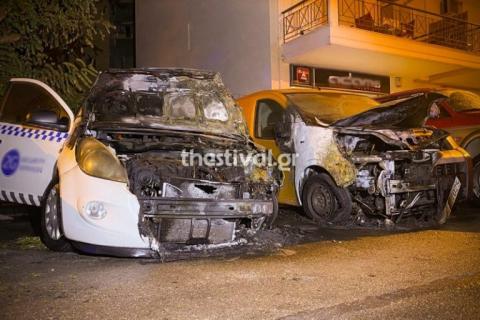 Thessaloniki,Greece: In the early hours of October 12th we set fire to 2 security vehicles by Incendiary cell of solidarity

As time goes by we see State authority arming itself, aiming to limit the actions of the potentially dangerous ones who stand against it and its interests as much as it can. This is seen in the development of anti-terror laws and the introduction of new repressive legislation, the upgrading of its security infrastructure, the continuous recruitments of cops, and the introduction of new forces ready to enforce peace and order on the streets of the metropolis.

Meanwhile, it is proposing attacks and applying them with the aim of challenging the reflexes and strength of the forces it is confronting today, while on other occasions it looks only to eliminate their physical, ethical, and political being. That is what we understand by the provocative attitude of the cops in demonstrations, the occasional arrests and huge case files compiled, the raids on illegal spaces and the eviction of occupations. The journalists on their side, in co-operation with their bosses, are reproducing the rhetoric of authority, validating their role as the media of State propaganda in the social system.

All this makes up the picture of the political scene shaped by the forces of New Democracy, who now have the State machine in their hands. This seems to be their plan in order to strengthen the mechanisms of the State and economic power against those who react. This aim, the strengthening of the world of authority, goes hand in hand with any type of management of State authority. A political power cannot, and would not, have any reason to exist if this target were not part of its agenda.

Therefore, independently of a government’s direction, the face it shows and the moves it makes, be they patient or sharp in intensity, they will always be aimed at reaching this goal.

The incompatible movement of free revolutionary ideas, which targets the base on which the State and the financial authorities are built, is by nature an enemy of both. The world it puts forth through its ideas, that of free associations in which relations are formed, will end any kind of enforcement. They know that such a world doesn’t fit them. What they fear most of all is that a taste of anarchy and free life will mean the end of the world of authority and any hope it has of returning to what it was before. Thus, the forces of the revolutionary movement, and of course the anarchists, are a serious threat to the existent, and this can be seen by the strategy that is being applied to them.

The liberated areas of the anarchist struggle, the squats, were targeted from the first moment of New Democracy’s political power, while today, and since the exploratory period for the State has passed – with the announcements of the ministry of public order and the famous ultimatum–, we see the application of a repressive plan which all the revolutionary forces will have to face. We must not think that familiarization with this means will be acquired by the stance that the anarchist movement has shown for decades, and the State for its part is helping us to become aware of the universal truth of the present time. Nothing is given away without a fight.

But some people refuse enforcement as the standard in the relationships that are built. All of them, fighters of a free non-authoritarian life, are participating in the war in act between these two worlds; we work on our contradictions, we surpass our limits, realizing how crucial the defence of our aspirations is at any cost.

In the early hours of October 12 we set fire to 2 security vehicles parked on Makedonias road, in the east side of the city, strengthening the diverse character of the anarchist struggle, responding to the call for the defence of our infrastructures.
Solidarity to Terra Incognita squat, and to every other struggle infrastructure that has been facing, or will be facing, repression.