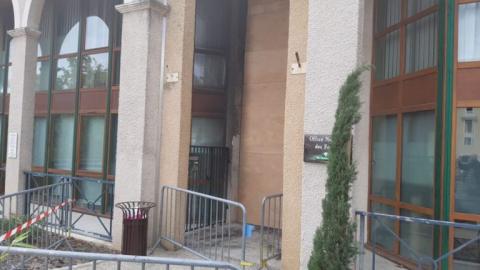 via: roundrobin.info, translated by Act for freedom now!

Aubenas, France – Incendiary attack on the Office National des Forêts [National Forestry Office] in Aubenas in the Ardèche, in the night of 5 to 6 October

I heard it said that forests need to be “managed”. Worse still, that they need to be “cleaned”.

I heard that forests should be “organised”, become more profitable, accessible, attractive. That people should walk in them on Sundays, on safe wide paths, dogs on leashes, picnics on the tables provided.

I heard forests need to be “protected”. In other words, “controlled”.

I heard that trees should be planted in rows to produce notebooks for uninteresting notes, insipid books, stupidifying magazines and the shelves to put them on.

I heard it was necessary to support forests, through ecological laws and parties, and that they were the means to defend them from wicked industrialists.

I heard that dead wood should not be picked up so as not to disturb the fragile ecosystem.

I heard one must not go off the beaten path so as not to damage the plants.

I heard that walking alone in the forest could be “dangerous”.

I heard one mustn’t light fires because it could destroy the forest. But cutting all the trees down, no problem?

I heard that you could go to supermarkets during lockdown but not pick flowers. At other times you need permission. Not from the plants, dear simple people, but from the public administration.

I heard I should be glad that there are “natural parks”.

I heard forests had owners. That these owners were not its inhabitants with fur, feathers and bark.

I heard that these inhabitants had to be regulated through hunting quotas.

I heard that dogs must be kept on a leash, but humans – who have a State permit – can kill at leisure, with weapons so sophisticated they don’t even question what their prey is.

I heard it was necessary to raise awareness of “respect for nature” among young people made to grow up surrounded by concrete.
I heard it said that an ultra high-tech society could be “green”.

I heard that the term “sustainable” and “ecological” means destroying 99% of the trees in a plot, digging 40 cm deep grooves in the mud, and of the iron monsters, fed with petrol, that are needed to do all that. I heard the sound of falling trees, the machines raizing them to the ground, the roar of the 4 × 4s of the forest “protectors”.

I heard that sawmills could be “self-managed”. The exploitation of timber optimized, for a good cause, “alternative”.

I heard that trees need to be planted in order to save the human species.

I heard you could plant a tree by buying a packet of pasta.

I heard that trees could cure cancer. But who will cure them of our presence?

So I covered my ears and screamed. Screamed so loud that the leaves of the trees shuddered. Screamed so long that my voice and others’ dried up. Once silence returned, I remembered other things I had learned.

I have learned that forest control means population control, control over my life.

I have learned that the human being is stupid, cowardly, ignorant or sadly realistic. That when they are hit twice they convince themselves it is for their own good, or rejoice that they didn’t get a third. That they are even proud to have left their “natural state”. Big step forward!

I have learned that I don’t just love forests for their wealth of life, death and what’s in between, for what they are, that my repulsion for their fate isn’t just empathy but that my own possibilities are also restricted, controlled, rigged, destroyed.

Then I remembered the acts of sabotage against the destruction of forests. Machinery vandalized, sawmills burned down, humans attacked.

I remembered that I could act and not just go deaf and blind to protect myself. So I took part in an incendiary attack on the National Forestry Office, in Aubenas, in the night between 5th and 6th October.

Certainly a ridiculously small act in the face of the destruction all over the planet of what is still alive in this world. But it is an act that wants to signify more than its immediate impact. That’s why I am writing this, to prevent it from becoming just another piece of news ignored by the media. Because it also means that it is possible to self organize to attack this society of management, control and exploitation directly. A society found in our constructed behaviour, which must be fought, but also in the institutions, that we must not forget to attempt to destroy.

A greeting, on this occasion, to those who have not forgotten to attack, to not submit, to reflect and keep on trying.
Courage to those in prison for their ideas or their acts.