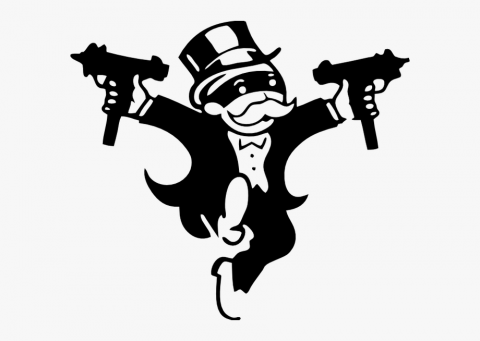 2020 was the year when anarchist started to mean riots and fires again. This was good news, because for a while there it started to feel like it meant bitcoin and free markets. Some anarchists really love money, apparently. Some even seem to prefer black Friday to black November. I’m talking, of course, about anarchist-capitalists.

Of all the adjectives forcing themselves onto the noun, capitalist is the most insistent, the most pervasive. Anarchist-capitalists, if Google search results are anything to go by, are everywhere.

Who are they? Where did they come from? What do they want?

Is anarchist-capitalism an online phenomenon, like so many other anarchisms, or is it out there in the world talking to people and making and breaking stuff?

What are the differences between the anti-capitalist anarchists we know and (sometimes) love, and this other crowd? What are the similarities? Are there overlaps in our mileus? In our ideas?

Would you rather be at a bar full of Bernie/Biden bro’s, or bitcoin/bow-tie bro’s?

Do you think of anarchist-capitalists as your friends? Enemies? Rivals?

Where do we end and they begin? Is an anarchist who charges other anarchists money to listen to them talk on zoom still an anti-capitalist? What about the professional patreon-ers and the gofundme grifters? In this neverending nightmare of buying, selling, clocking in and clocking out, are we all capitalists to one degree or another?

Penny for your thoughts, internet.