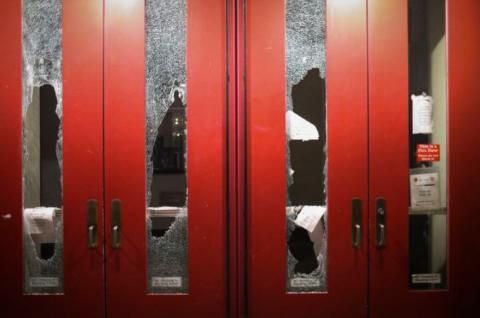 Why We Break All The Windows
by Lou Trayette

There has been much debate in recent months weighing the efficacy of various protests tactics. Dividing lines between ‘good’ and ‘bad’ protesters have been drawn by those wishing to control the actions of others, certain that they alone are the righteous arbiters of appropriate expressions of anger at the system of oppression forced on the people by law enforcement, the government, and their neo-fascist lackeys.

It is often missed by these self-styled ‘leaders of the movement’ that they are playing the surrogate role of our oppressors by attempting to stifle the liberation we struggle for.

Many of these ‘leaders’, loudest bullhorn in hand (obvious future politicians), claim that any actions that do not align with their idea of purity when it comes to effective action against the system are derailing the movement they had envisioned (because it is one they perceive they can control). Actions these ‘leaders’ disapprove of are said to be stealing focus away from the ‘true message’. Over the years the ‘true message’ has been a constantly moving target to be sure…civil rights, anti-nuclear, anti-war, anti-globalization (what ever happened to that one!?!), environmental concerns, resisting police brutality, and on and on. Whatever the cause du jour, the conversation and confrontation is the same….’good’ vs ‘bad’ protestors and ‘productive’ vs ‘counterproductive’ actions.

On the evening of November 4th, 2020 a group of protesters broke windows and committed other acts of property destruction in downtown Portland after splitting away from a separate group who insisted on ‘peaceful protest’ and the decidedly meaningless concept of ‘unity’ (a favorite tool of those wishing to halt momentum being generated by those expressing their rage against a system suffocating all of us to varying degrees).

The common refrain in the media, coming from pundits, government and law enforcement officials, as well as ‘protest leaders’, is that ‘random acts of destruction’ distract from the message of change being espoused by some. They also revel in the listing of businesses that ‘didn’t deserve’ to be targeted for attack whether it be because of the gender or race of the owner/s or the ‘services’ they provide.

While there is a glimmer of hope in the subtext of these statements that there are indeed businesses that deserve to be targeted for property destruction, this line of thinking largely misses the point and purpose of actions such as these. What is ignored or not understood by many is similar to the misunderstanding that happens with the looting and arson that sometimes take place after acts of violence against the people.

We are expressing rage.

When rage is released it is often raw, unformed. Rage chooses its targets instinctively not solely tactically. The instincts of a human animal recognize its oppressors and its cages in a less nuanced (and it could be argued more pure) way than when choices are made in the cool and calculated world of academia or mind-numbing large-scale consensus seeking processes.

Walls and boundaries take many forms, some obvious and some less so. Walls can be cultural, racial, sexual, governmental, or social. But one thing that walls surely are is physical. Rage sees the animal thrash and throw itself at the physical barriers enveloping it. Rage lashes out at the most obvious and fundamental physical expression of its oppression.

When we express our rage, we attack the physical manifestation of a system that has been rapidly constructed in order to separate us from ourselves and stratify those who choose collaboration with our own death.

One of civilization’s favorite manifestations of walls are those made of glass.

Constructing and displaying walls of a transparent and fragile substance is the system gloating at our willingness to self-repress. It is the thinnest veneer and representation of a boundary. It is a wall that the system believes we are too broken and domesticated to challenge. A window is a wall that provides no visible barrier and is hardly an impenetrable one physically. Windows are our own self-defeating acquiescence to play their game and subjugate ourselves to their authority.

Windows are the system’s proof to itself that it is working. The existence of windows express the health of the system and are a measure of the people’s willingness to bow to an invisible set of rules that have been imposed. Windows are the canary in the system’s coalmine.

In a previous generation the destruction of windows was referred to as ‘breaking the spell’. The spell is that one cast upon us and under which we allow the consolidation of power to go unchallenged.

In a war for our freedom as humans be it racial, sexual, social, cultural, or environmental, windows are the dividing line between a seething caged family of human animals and those of our own that seek to enslave us.

This is why we break all the windows.