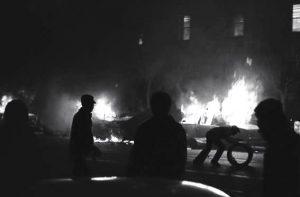 via: https://malacoda.noblogs.org/post/2020/10/29/comunicato-dellanarchico-sa…
29th October 2020
A COMMUNIQUE FROM DAVIDE DELOGU
It’s a pity not to be able to read your communiques. Unfortunately, blocked by the wall of censorship I am unable to write a contribution to the struggle so in these few minutes I am letting out my joyful words of complicity and tenacity between us prisoners in struggle. In fact I believe that cohesion is an important factor of growth in the revolutionary component against the attack being carried out by the prison system in its logic of burying, controlling and harassing. A logic being put forward with totalitarian abusive methods through an infamous policy of aggression with several authoritarian forces acting as one single body so as to strike harder and attempt to destroy us. Against the annihilation of the human and of my principles through the application of isolation within isolation of 41bis in which I find myself, my response is «war».

I believe that if they touch one of us they touch us all and that mutual support and combative solidarity, as is happening in this battle, can also strengthen us as a body that unites when necessary to bring about attack and counter-attack on an enemy set on annihilating us. For my part, in spite of everything, it is daily conflictuality that I make explode against constant harrassment and everything that exists. So no peace. Besides, I am going ahead with my refusal to go to the crap exercise yard, a struggle that has been going on for months against isolation. I shall start the prison food strike from 26th October, which I am linking to that of the comrades in the AS2 in Terni who have started this solidarity path that I am proud of, along with all the other comrades taking part in other jails. My exercise yard strike is indefinite while that of the prison
food will continue beyond 1st November, which in 14bis is almost a hunger strike, to express my solidarity support to Natascia’s hunger strike against censorship. Therefore I am uniting my struggles against isolation in this context of strikes to also express my solidarity with Natascia. My prison food strike will go on beyond 1st November until Natascia stops her hunger strike against censorship.
A hug full of the strength to fight to all the comrades inside who are going against the brutalization of the barrocratic system and its overbearing persistence, and in the hope that also outside the anger that explodes in direct solidarity freer to act is being practiced.
Presoneri anarchicu, Davide Delogu
————–
Davide’s current address:
Davide Delogu
C. C. di Caltagirone
Contrada Noce,
S. Nicola Agrò
95041 Caltagirone (Ct)
Italy
Translated by act for freedom now!